Nothing makes a person sound smarter than articulating some huge idea about how the world is going to change, or how they can change it, over the coming years.

A big idea can lead to countless books, TV appearances, and a nice stream of speaking fees at conferences across the country.


Big ideas — the likes of which you might hear from Malcolm Gladwell or the Freaknomics authors — make for excellent food for thought and intellectually stimulating discussion.

Every few years a man, or a woman, whose name is often familiar to few beyond the circle of their family and friends, is ambling through a more or less anonymous life when they find themselves ambushed by history. For many of these people, their life changes forever. Frequently, tragically, it ends; leaving behind an image that haunts the world long after they themselves have gone.


Neda Soltan was such a person, a young beautiful woman who had studied philosophy, was now an aspiring singer, who found herself abruptly catapulted from the crowds of Tehran to become the face of protest against Iran’s repressive rulers; a symbol of rebellion against the fraudulent election that had just returned Mahmoud Ahmedinejad to power.


Like the nameless student who taunted that tank in Tiananmen Square, like Jan Palach, the Czech student who died after setting himself alight in Wenceslas Square in January 1969 to protest against the Soviet-led invasion of Czechoslovakia, Neda Soltan became the icon for the mutiny against Iran’s brutish regime as images of her face, and amateur footage of her murder by a sniper from the pro-government Basij militia, sprinted around the world. Like the photograph taken in South Vietnam of a bewildered young girl, the victim of a napalm attack, running naked down a road; and like the images of those skin-and-bones internees, standing semi-naked in the prison camp run by Bosnian Serb forces in Omarska in 1992, their ribs as prominent as xylophone keys, the image of Neda Soltan lying bleeding on a Tehran street has become the shorthand for the horrors of a conflict. With their beseeching eyes such images become, as the war photographer Don McCullin has pointed out, our modern versions of religious icons.

Under other circumstances, this would have been a year to savour in the long, rapid ascent of Lloyd Blankfein. Goldman Sachs, the investment bank he has led for three years, not only navigated the 2008 global financial crisis better than others on Wall Street but is set to make record profits, and pay up to $23bn (€16bn, £14bn) in bonuses to its 31,700 staff.

For Mr Blankfein, a scholarship boy from the Bronx whose first financial job at Goldman was selling gold coins in its commodities trading arm, has prospered to an extent that was implausible even 10 years ago, when it became a public company. Its influence has spread throughout the world, from New York and London to Shanghai and São Paulo.

A good slice of its success is attributable to Mr Blankfein, a tough, bright, funny (everyone remarks upon his unpretentious, wisecracking manner) financier who reoriented Goldman. Under his leadership, trading and risk-taking have pushed to the fore, reducing the influence of its investment banking advisers.

In 2009, however, Wall Street faced a wave of public anger at how banks that survived only with the assistance of taxpayers seemed unchanged and unrepentant. Goldman’s profitability, and suspicions that its deep links with governments around the world give it unfair advantages, made it a symbol of Wall Street greed and excess. It was described by the Rolling Stone writer Matt Taibbi as “a great vampire squid wrapped around the face of humanity”. 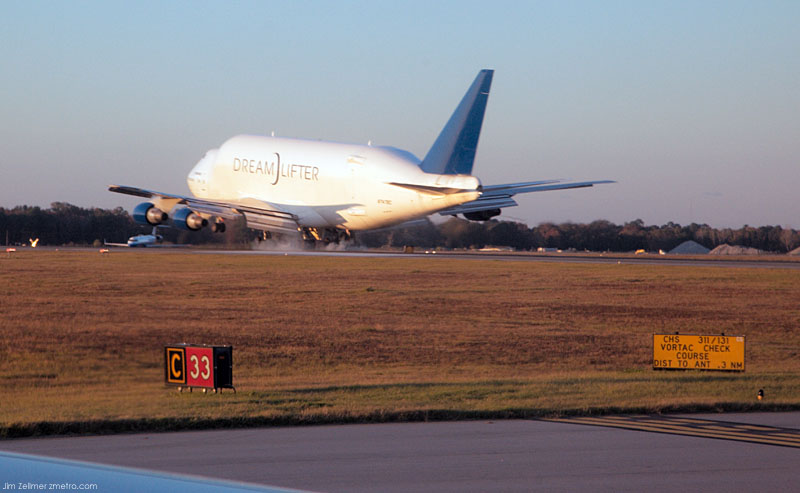 With the recent first flight of Boeing’s new 787, I thought it timely to post a photo from it’s supply chain: a converted 747 freighter known as the “Dreamlifter” that flies parts from around the globe to Everett, Washington for final assembly.

Perhaps that’s not the most polite way of putting it, but fact checking continues to emerge as a favorite practice of the public and certain elements of the press. (Though most of us in the press spend more time calling bullshit on each other than checking our own work.) In a recent column for Columbia Journalism Review, I stated that fact checking “is becoming one of the great American pastimes of the Internet age.”

Everybody loves to call bullshit. Thanks to the Internet, it’s easier than ever before.

The irony is that this trend emerges at a time when professional fact checkers, who traditionally worked at magazines, are being laid off. As a result, it appears as though the future of fact checking is in open, public and participatory systems and organizations, rather than the closed, professional systems traditionally used by large magazines. The Internet has made this shift possible.

Here’s a selection of fact checking-related news from the past year:

The expenses racked up by U.S. lawmakers traveling here for a conference last month included one for the “control room.”

Besides rooms for sleeping, the 12 members of the House of Representatives rented their hotel’s fireplace-equipped presidential suite and two adjacent rooms. The hotel cleared out the beds and in their place set up a bar, a snack room and office space. The three extra rooms — stocked with liquor, Coors beer, chips and salsa, sandwiches, Mrs. Fields cookies and York Peppermint Patties — cost a total of about $1,500 a night. They were rented for five nights.

While in Scotland, the House members toured historic buildings. Some shopped for Scotch whisky and visited the hotel spa. They capped the trip with a dinner at one of the region’s finest restaurants, paid for by the legislators, who got $118 daily stipends for meals and incidentals.

Eleven of the 12 legislators then left the five-day conference two days early.

The tour provides a glimpse of the mixture of business and pleasure involved in legislators’ overseas trips, which are growing in number and mostly financed by the taxpayer. Lawmakers travel with military liaisons who carry luggage, help them through customs, escort them on sightseeing trips and stock their hotel rooms with food and liquor. Typically, spouses come along, flying free on jets operated by the Air Force. Legislative aides come too. On the ground, all travel in chauffeured vehicles.

Cast your mind back to that SigTarp report, published last month.

Readers will recall there’s been a persistent stink over whether the efforts of the Federal Reserve and the US Treasury to prop up AIG had the effect of bailing out Goldman Sachs — its largest trading partner. Goldman Sachs always denied that idea, saying its exposure to AIG was collateralised and hedged against the mega-insurers’ fall. Others, were not so sure.

Last week the Wall Street Journal continued that particular line of thought with an article titled “Goldman fueled AIG gambles“, which examined GS’s role in acting as a middleman between the insurer and other banks. In short, Goldman offered banks protection on some of their investments (for instance on CDOs of home loans), which it in turn hedged with AIG in the form of CDS.

Twenty years after it was toppled, the area around the Berlin Wall is becoming a battle­ground again. In the streets neighbouring Berlin’s Todesstreifen – the once heavily guarded “death strip” on the east side – a new conflict is brewing. This time, it is between wealthy newcomers to the German capital’s regenerated core, and less monied residents, who fear being displaced.


Silvia Kollitz, an anti-development activist, is a resident of Prenzlauer Berg, a once dilapidated but now chic district of east Berlin. She feels her local area, with its pretty, tree-lined streets and sleek cafés, is being turned into a refuge for the rich. “The new buildings being put up are just for people with lots of money – who don’t use state schools and look at the rest of us as ‘local colour’ from behind their locked gates and high walls,” she says.

While Kollitz and fellow activists are seeking to halt these changes, they are fighting a strong tide. For the first time since the second world war, Berlin is attracting the international wealthy. Shaking off its gloomy cold war past, the city’s rebuilt centre is now packed with designer emporia, five-star hotels – Berlin has more than New York – and restaurants, sandwiched between Prussian palaces and new ministry buildings.

Quite a bit of work moving snow today, but, the early morning scenery was quite beautiful.

THERE is a widespread view, particularly among environmentalists and liberals, that big businesses are environmentally destructive, greedy, evil and driven by short-term profits. I know — because I used to share that view.

But today I have more nuanced feelings. Over the years I’ve joined the boards of two environmental groups, the World Wildlife Fund and Conservation International, serving alongside many business executives.


As part of my board work, I have been asked to assess the environments in oil fields, and have had frank discussions with oil company employees at all levels. I’ve also worked with executives of mining, retail, logging and financial services companies. I’ve discovered that while some businesses are indeed as destructive as many suspect, others are among the world’s strongest positive forces for environmental sustainability.


Much more on Jared Diamond here.