Our trip was made possible through the incredible generosity of my parents. We are truly blessed!

Asking to delay repayment on your debt – or defaulting, as the world’s press is carefully not calling it – has turned out not to be a good way for Dubai’s Sheikh Makhtoum to win friends and influence lenders to Nakheel, the property arm of the state-owned conglomerate Dubai World. Markets have tumbled worldwide; investors, reminded that governments can be subprime too, have dumped the debt of other dodgy-looking economies (including Greece); and in Dubai… everyone is on holiday.

What is surprising here is not that Dubai is on the verge of default. It is that anyone was willing to lend them ludicrous sums of money in the first place. Calculated Risk points out that Sir Win Bischoff, then at the (US) state-controlled Citi and now, appropriately enough, at the (British) state-controlled Lloyds Banking Group, was raving about raising $8bn of loans for Dubai last year and as recently as December chose to go public with a “positive outlook on Dubai”. Another non-surprise: state-controlled Royal Bank of Scotland was Dubai World’s biggest loan arranger. In the UK, Dubai World has been buying up a long list of property, according to Anita Likus at The Source; the assumption is it will shortly be selling. 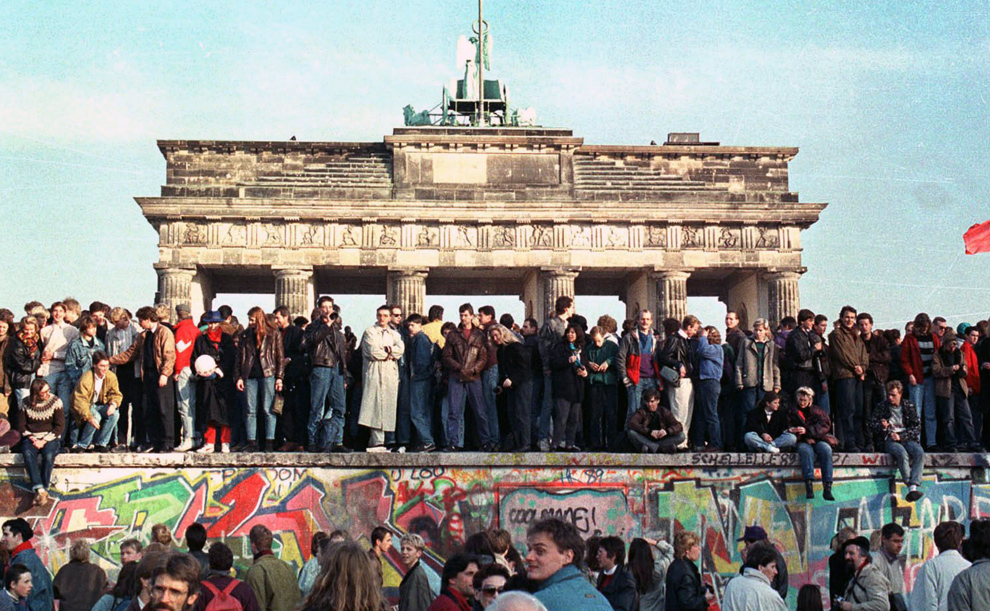 Twenty years ago, on the night of November 9, 1989, following weeks of pro-democracy protests, East German authorities suddenly opened their border to West Germany. After 28 years as prisoners of their own country, euphoric East Germans streamed to checkpoints and rushed past bewildered guards, many falling tearfully into the arms of West Germans welcoming them on the other side. Thousands of Germans and world leaders gathered in Berlin yesterday to celebrate the “Mauerfall” – the dismantling of the Berlin Wall and German reunification – and to remember the approximately 100-200 who died attempting to cross the border over the years. Collected here are photographs both historic and recent, from the fall of the Berlin Wall. Be sure to pause on photos 12 – 15, and click them to see a fade effect from before to after. (38 photos total)

Now to the regional takeaway from our trip

We believe that few trust the United States. This is obvious in private conversation. And it is clear to all that confidence in the dollar is low. This is mostly mentioned only in private.

In public there is quiet response when the Treasury Secretary of the United States utters words about a strong dollar. Asians have heard that for years and with the many different accents of the various Treasury Secretaries. Geithner would serve the country better by ceasing to mouth the same words that his predecessor Snow and others used. He is not believed. Frankly, in some circles he is actually seen as an incompetent political hack. He is blamed by some for the insufficiency of the New York Fed under his presidency to supervise the primary dealers that failed – Countrywide, Bear Stearns, and Lehman. And the ethics issues surrounding the NY Fed under his tenure are viewed as appalling; this continues to surface in private conversations. Some folks are puzzled about why Obama maintains his support for Geithner. Some just attribute it to the President’s inexperience as a leader.

My takeaway is that our present Secretary of the Treasury is seriously and sustainably injuring the image of the United States. He has lost credibility. His actions are real and they impact markets. My conversations with those who are attempting to market GSE securities to Asians and getting rebuffed are validation enough for me on this point. When the Fed stops buying GSE mortgage backed securities, this reality will hit the markets in a re-pricing of that asset class. Spreads are going to widen.

The American federal budget deficits are worrisome everywhere. Policy promises from Washington to reduce them are greeted with great skepticism. Often they are privately described as American arrogance. Publicly, Asians are very polite and do not often subject their guests to embarrassing criticism. Privately they are quite candid. In my view they are correct: America is arrogant and seems to pretend that it is still the best and most trustworthy financial and capital market in the world. There is no basis for the US to have such a view of itself. We have squandered our reputational capital as a financial center leader.

Madison is truly blessed to have such a fine facility, courtesy of Jerry Frautschi’s landmark $200M+ gift. However and unfortunately, the financial spaghetti behind its birth is complicated and controversial, particularly at this moment when Overture’s parent lacks liquidity to fund the project’s remaining debt.

Yet, the facility is simply stunning. Have a look at these panoramic views.

In an effort to preserve the pre-Overture scene, we shot panoramic images in 1999 and again, after construction in 2006.

I do have one financing suggestion. Give Goldman Sachs Lloyd Blankfein a call. After all, Goldman Sachs’ record bonuses are a direct result of massive taxpayer intervention to prop up certain banks and other “too big to fail” entities such as AIG. GS is well connected at the very top of our Government.

A friend sends along the following chart. It examines the prior private sector experience of the cabinet officials since 1900 that one might expect a president to turn to in seeking advice about helping the economy. It includes Secretaries of State; Commerce; Treasury; Agriculture; Interior; Labor; Transportation; Energy; and Housing & Urban Development and excludes Postmaster General; Navy; War; Health, Education & Welfare; Veterans Affairs; and Homeland Security — 432 cabinet members in all.

On Friday, my latest tweet was automatically posted to my Facebook news feed, as always. But this time, Tom Scoville noticed a difference: the link in the posting was no longer active.


It turns out that a lot of other people had noticed this too. Mashable wrote about the problem on Saturday morning: Facebook Unlinks Your Twitter Links.

if you’re posting web links (Bit.ly, TinyURL) to your Twitter feed and using the Twitter Facebook app to share those updates on Facebook too, none of those links are hyperlinked. Your friends will need to copy and paste the links into a browser to make them work.


If this is a design decision on Facebook’s part, it’s an extremely odd one: we’d like to think it’s an inconvenient bug, and we have a mail in to Facebook to check. Suffice to say, the issue is site-wide: it’s not just you.

As it turns out, it wasn’t just links imported from Twitter. All outbound links were temporarily disabled, unless users explicitly added them as links via an “attach” dialogue. I went to Facebook, and tried posting a link to this blog directly in my status feed, and saw the same behavior: links were no longer automatically made clickable. You can see that in the image that is the destination of the first link in this piece.

The problem was quickly fixed, with URLs in status updates automatically now linkified again. The consensus was that it was in fact a bug, but it’s little surprise that people suspected otherwise, given the increasing amount of effort Facebook puts into warning people that they are leaving Facebook for the big bad unsafe Internet:

What is so important about H.R. 1207: the Federal Reserve Transparency Act of 2009 aka the ‘Audit the Fed’ bill? This bill “To amend title 31, United States Code, to reform the manner in which the Board of Governors of the Federal Reserve System is audited by the Comptroller General of the United States and the manner in which such audits are reported, and for other purposes.” may not sound terribly exciting, but in addition to making the Fed accountable for its quasi-fiscal activities, it could well set an important precedent for the enhanced accountability of operationally independent central banks everywhere.


The Finance Committee of the US House of Representatives has just passed this bill, which is an amendment sponsored by Representatives Ron Paul (Republican) and Alan Grayson (Democrat) to Representative Barney Frank’s HR 3996, the “Financial Stability Improvement Act of 2009?. The amendment allows the US Government Accountability Office to conduct a wide-ranging audit of the financial activities of the Federal Reserve Board. Specifically (and quoting from the RonPaul.com website):

In The Card Game, a follow-up to the Secret History of the Credit Card and a joint project with The New York Times, Bergman and the Times talk to industry insiders, lobbyists, politicians and consumer advocates as they square off over attempts to reform the way the industry has done business for decades.

“The card issuers could do anything they want,” Robert McKinley, CEO of CardWeb.com, tells FRONTLINE of the industry’s unchecked power over consumers. “They could change your interest rate. They could impose an annual fee. They could close your account.” High interest rates along with more and more penalty fees drove up profits for the industry, Bergman finds, as the banks followed the lead of an aggressive upstart: Providian Bank. In an exclusive interview with FRONTLINE, former Providian CEO Shailesh Mehta tells Bergman how his company successfully targeted vulnerable low-income customers whom Providian called “the unbanked.”

“They’re lower-income people-bad credits, bankrupts, young credits, no credits,” Mehta says. Providian also innovated by offering “free” credit cards that carried heavy hidden fees. “I used to use the word ‘penalty pricing’ or ‘stealth pricing,'” Mehta tells FRONTLINE. “When people make the buying decision, they don’t look at the penalty fees because they never believe they’ll be late. They never believe they’ll be over limit, right? … Our business took off. … We were making a billion dollars a year.”

Chef Dominique Crenn was raised in Versailles, France. She now makes an incredible Thanksgiving dinner, but when she first came to the U.S., the entire holiday threw her off.


She sat down with NPR’s Steve Inskeep to discuss how she cooks for Thanksgiving.

“I was a little bit lost when I came here,” she told Inskeep. “I had no idea what Thanksgiving was about.”

In France, turkey is eaten at Christmas. So the American phenomenon of Thanksgiving turkey and dressing mystified her.

But now, she’s hooked. Crenn has been celebrating Thanksgiving for about 20 years. “This is a pretty cool holiday,” she said.