Dee Hall covers an issue vital to our democracy – over zealous prosecutors:

A Wisconsin State Journal investigation, however, found instances in which court records and transcripts back up his critics’ claims that he has crossed ethical lines. Stretching back to the early 1990s, Humphrey has been the subject of criticism accusing him of ethical lapses, poor judgment and unreasonably aggressive tactics. Critics have included defendants, defense attorneys, judges and three of the four district attorneys who’ve supervised him.
The State Journal examined more than 2,000 pages of documents, including records from Humphrey’s office files obtained under the open-records law. The newspaper also interviewed more than two dozen attorneys, judges, defendants, legal experts and law-enforcement officials.
The newspaper’s investigation found that the veteran prosecutor:
— Wrongfully kept a young man in the Dane County Jail for a month, even after he was repeatedly notified of the error.
— Made false or misleading statements in affidavits, in correspondence and in court hearings to advance his case or to cover up mistakes.
— Charged two witnesses and had a third arrested for failing to show up for trials that had been cancelled — a tactic his boss had warned him was “an abuse of your authority.”
— Aggressively pursued seven felony charges against a bankrupt father who was $2,846 behind in child support — a prosecution the judge said should “make one wonder about the integrity of (the) justice system.”
— Twice pursued vehicular-homicide charges using speed estimates his own experts told him were inflated.
One of those cases was Humphrey’s failed prosecution of Adam Raisbeck, a 17-year-old from Marshall. Humphrey’s actions in the case prompted a blunt reprimand from his boss, and the misconduct findings that are headed to the Supreme Court.

See where the retreating British Army was massacred! Marvel at Osama bin Laden’s old Tora Bora bunker! Gaze upon the crater where the giant Buddha statues of Bamiyan stood before the Taliban blew them up!
Or maybe not. Tourism in Afghanistan, it’s safe to say, is a tough sell these days. Nobody is touting it as “the new Croatia.” Kabul and Kandahar never figure in the hunt for “the next Prague.” And don’t look for the war-ravaged country in the next installment of “Where in the World Is Matt Lauer?”
All of which makes Lonely Planet’s new Afghanistan guidebook the most eyebrow-raising title of the year.
The 244-page guide contains all the usual write-ups of mosques, mountains and museums, plus colorful maps and 17 pages of enticing photographs. But turn to the “Dangers & Annoyances” section, and instead of the usual cautions about bedbugs and pickpockets you find a warning about “the danger of an insurgency in the south, plus warlordism and terrorist violence in some other parts of the country.”

The true story of Germany’s most famous anti-Nazi heroine is brought to thrilling life in the multi-award winning drama SOPHIE SCHOLL-THE FINAL DAYS. Academy Award nominee for Best Foreign Language Film of 2005, SOPHIE SCHOLL stars Julia Jentsch in a luminous performance as the young coed-turned-fearless activist. Armed with long-buried historical records of her incarceration, director Marc Rothemund expertly re-creates the last six days of Sophie Scholl’s life: a heart-stopping journey from arrest to interrogation, trial and sentence.
In 1943, as Hitler continues to wage war across Europe, a group of college students mount an underground resistance movement in Munich. Dedicated expressly to the downfall of the monolithic Third Reich war machine, they call themselves the White Rose. One of its few female members, Sophie Scholl is captured during a dangerous mission to distribute pamphlets on campus with her brother Hans. Unwavering in her convictions and loyalty to the White Rose, her cross-examination by the Gestapo quickly escalates into a searing test of wills as Scholl delivers a passionate call to freedom and personal responsibility that is both haunting and timeless.

I don’t subscribe to the newspaper my family sold to a chain in the mid-1990s. While I miss the New York Times crossword puzzle, I finally stopped my subscription, because I really wasn’t interested in reading the generic news that has replaced the community coverage we used to provide.
In more than 30 years of newspaper management, I experienced the transformation described in your white paper on Media 3.0, as we faced increasing competition from direct mail, segmented cable and the myriad of other choices served to advertisers.
But there is one underlying reason why newspapers will not be able to take advantage of the opportunities so well presented in your paper: They simply lack the intellectual capacity…

n a recent interview, Mr. Santulli of NetJets marveled at the vast wealth driving this growth. He also said that not all of the big long-range luxury jets, like Gulfstreams, are ferrying teams of executives across the seas.
“Take a wild guess. What do you think the most common city pair for our Gulfstream fleet is?” he asked.
“New York to L.A.?” I replied.
“Not even close. It’s New York to Washington, D.C.,” he said.

THE United States faces two major security challenges this century. Both involve water.
The increasing demand for water in the Western United States in an era of diminishing supply has put America’s highly efficient agricultural system in jeopardy. At the same time, our nation’s energy demands have led President Bush and Congressional leaders from both parties to call for more domestic production of biofuels like corn ethanol. Some agricultural experts fear that the country does not have enough water and land to both replace the declining agricultural production in the arid West and expand the production of biofuels.
There is, however, a sustainable solution: a return to using the land and water of the East, which dominated agriculture in the United States into the 20th century.
Until the middle of the 1900s, much of our country’s food and fiber was produced east of the Mississippi River. Maine led the nation in potato production in 1940, and New York wasn’t far behind. The South, including Alabama, Georgia and Mississippi, dominated cotton. Large amounts of corn were grown in almost every state for consumption by the local livestock and poultry. Regional vegetable markets, especially in the mid-Atlantic states, served the population centers of the East.
By 1980, Western irrigation and improvements in transportation had largely destroyed this Eastern system of agriculture. Irrigated cotton in Arizona, California and Texas displaced the cotton economy of the Deep South. Idaho and Washington became the nation’s major potato producers. Corn production became more concentrated in the Midwest.

When I first picked up Car and Driver’s (C&D) fateful December 2006 issue, I was convinced that the splashy, graphics-heavy revamp sounded the death knell for my favorite buff book. But the resulting reader backlash was so loud I felt sure Ann Arbor’s finest would be scared straight. A plaintive apology followed the editor’s arrogant dismissal of the reader revolt. C&D seemed poised for a revival. Nope. The October 2007 issue isn’t just the lowest point in the mag’s inexorable descent; it’s a dive below the limits of acceptability.
The buff books’ decline is inversely proportionate to digital media’s rise. Why fork over good money for a magazine subscription, endure two-month old editorials and wade through dozens of ads when the web provides fresh, instant and less ad-intrusive content for free? For the mags, there’s an obvious answer: an upmarket re-imagining of the paper-based genre, like the UK’s elegant, ballsy evo magazine.

Auto magazines are not the only print vertical dealing with decline. 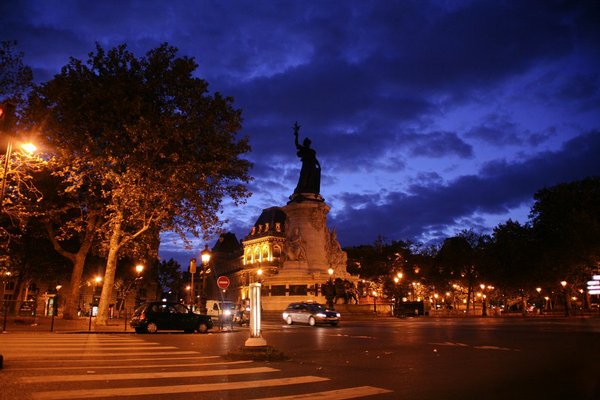 Paris Sunrise: August 2007 (taken while zooming around in a Paris cab driven by a former exchange student – who spent a year on a Iowa dairy farm).

“I want to tell the American people that the French people are their friends,” he said. “We are not simply allies. We are friends. I am proud of being a friend of the Americans. You know, I am saying this to The New York Times, but I have said it to the French, which takes a little more courage and is a little more difficult. I have never concealed my admiration for American dynamism, for the fluidity of American society, for its ability to raise people of different identities to the very highest levels.”
Mr. Sarkozy, who has been accused of being too enamored of all things American, said he considered France and the United States to be on equal footing and somehow better than many others, because they believe that their values are universal and therefore destined to “radiate” throughout the world. The Germans, the Spaniards, the Italians, the Chinese, by contrast, do not think that way, he said.

I had an opportunity to visit with a French Foreign Legion officer while on travel. This man mentioned that he had served with Americans in many places, including Afghanistan, Bosnia and other locales. I asked him for an impression of America after these interactions (he’s also travelled to the states with family): Resources. He said that when the Americans arrive, they always seem to have incredible resources. An well equipped base can be in service within “days”. 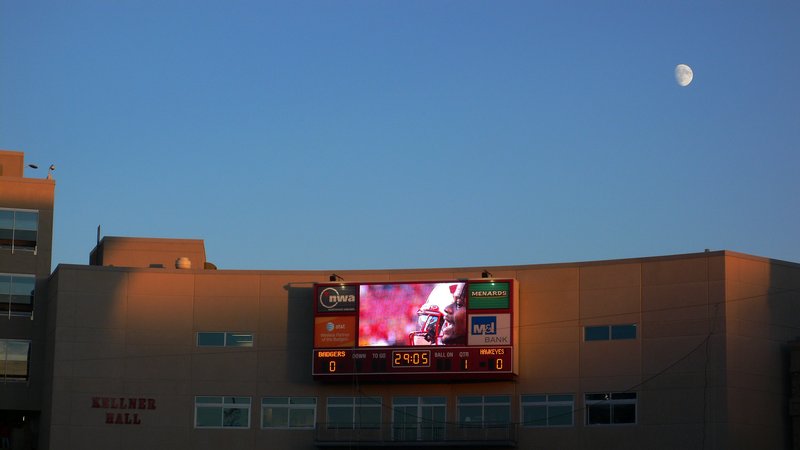 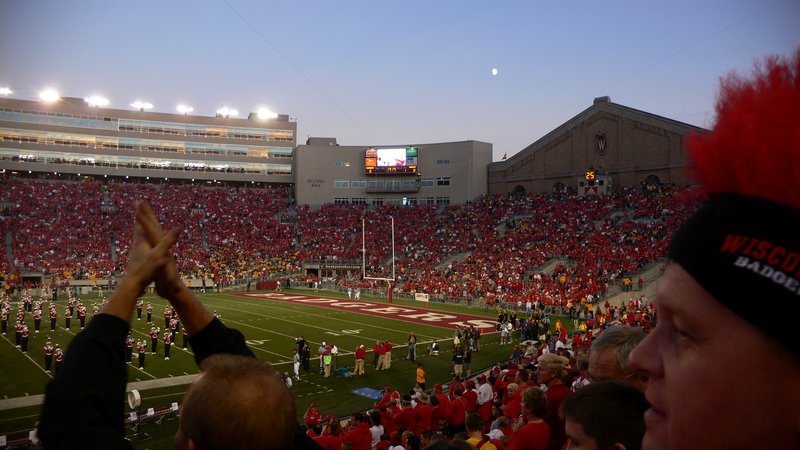