Before prohibition the seaside landscape of beer was flourishing. Variety was truly the spice of life, and every locale had its own. Styles traveled from the old world, and were enjoyed in the new. Then the 21st amendment happened, and the fields were burned, and salted. A once flourishing industry was destroyed, and all that remained was a weakened few. Before the microbrew revolution, 3 players came to dominate the entire empire. The feudal consumer was left to choose between three piss colored lagers all tasting exactly the same. They obtained these thrones through a brutal war. Expensive marketing budgets boasted a generic flavor that was at best, not offensive. As large corporations tend to do, the players got big, and they earned power. They used this power to influence policy in an effort to maintain their oligopolistic positions.

It’s hard for me not to draw parallel lines between Hollywood today, and big beer. Today only 6 studios produce nearly the entirety of our big screen entertainment. Much like beer they rely on marketing to drive their product. A script can be great, but if a studio can’t find a sure way to market it, it’s dead. The result is a series of the same movies over and over again. We put up with these movies, because when we go to the theatres, much like the bars of yesterday… there just aren’t any other choices. There is something happening though. The home-brewers are starting to talk to each other!

When David Zucker was a schoolkid in Milwaukee in the 1960s, one of his teachers made a prediction. “She said to me once, when I was fooling around in class, ‘Zucker, I know one day I’ll be paying good money to see you make me laugh, but right now, get your ass back in that chair and crack that book!'”


She was right. This badly behaved schoolkid would go on to reinvent US screen comedy with a movie called Airplane!, which he co-directed and co-wrote. Today, speaking in Manhattan, David is feeling a little rough. He was out the night before, it turns out, celebrating the film’s 30th anniversary with the movie’s co-creators, his younger brother Jerry and their lifelong friend Jim Abrahams. “I just couldn’t get out of bed this morning,” he says.

Well may they celebrate. Airplane! made $83m on its first release in 1980 (on an outlay of a mere $3.5m), and launched an entire comedy franchise, from the Police Squad TV shows to the Naked Gun movies they grew into – reconfiguring, in the process, one-time 1950s romantic lead Leslie Nielsen into a comic hero. Somewhere along the way, Zucker, Abrahams and Zucker (ZAZ for short) also inspired Saturday Night Live, launched another comedy titan of the 1980s, John Landis, and even gave the Farrelly brothers their big writing break.

Celebrated directors from around the world, including the Coen Brothers, Gus Van Sant, Gurinder Chadha, Wes Craven, Walter Salles, Alexander Payne and Olivier Assayas, have come together to portray Paris in a way never before imagined. Made by a team of contributors as cosmopolitan as the city itself, this portrait of the city is as diverse as its creators’ backgrounds and nationalities. With each director telling the story of an unusual encounter in one of the city’s neighborhoods, the vignettes go beyond the ‘postcard’ view of Paris to portray aspects of the city rarely seen on the big screen.

The true story of Germany’s most famous anti-Nazi heroine is brought to thrilling life in the multi-award winning drama SOPHIE SCHOLL-THE FINAL DAYS. Academy Award nominee for Best Foreign Language Film of 2005, SOPHIE SCHOLL stars Julia Jentsch in a luminous performance as the young coed-turned-fearless activist. Armed with long-buried historical records of her incarceration, director Marc Rothemund expertly re-creates the last six days of Sophie Scholl’s life: a heart-stopping journey from arrest to interrogation, trial and sentence.
In 1943, as Hitler continues to wage war across Europe, a group of college students mount an underground resistance movement in Munich. Dedicated expressly to the downfall of the monolithic Third Reich war machine, they call themselves the White Rose. One of its few female members, Sophie Scholl is captured during a dangerous mission to distribute pamphlets on campus with her brother Hans. Unwavering in her convictions and loyalty to the White Rose, her cross-examination by the Gestapo quickly escalates into a searing test of wills as Scholl delivers a passionate call to freedom and personal responsibility that is both haunting and timeless. 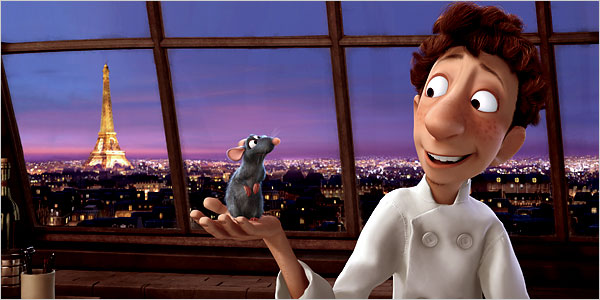 The moral of “Ratatouille” is delivered by a critic: a gaunt, unsmiling fellow named Anton Ego who composes his acidic notices in a coffin-shaped room and who speaks in the parched baritone of Peter O’Toole. “Not everyone can be a great artist,” Mr. Ego muses. “But a great artist can come from anywhere.”
Quite so. Written and directed by Brad Bird and displaying the usual meticulousness associated with the Pixar brand, “Ratatouille” is a nearly flawless piece of popular art, as well as one of the most persuasive portraits of an artist ever committed to film. It provides the kind of deep, transporting pleasure, at once simple and sophisticated, that movies at their best have always promised.
Its sensibility, implicit in Mr. Ego’s aphorism, is both exuberantly democratic and unabashedly elitist, defending good taste and aesthetic accomplishment not as snobbish entitlements but as universal ideals. Like “The Incredibles,” Mr. Bird’s earlier film for Pixar, “Ratatouille” celebrates the passionate, sometimes aggressive pursuit of excellence, an impulse it also exemplifies.
The hero (and perhaps Mr. Bird’s alter ego) is Remy (Patton Oswalt), a young rat who lives somewhere in the French countryside and conceives a passion for fine cooking. Raised by garbage-eaters, he is drawn toward a more exalted notion of food by the sensitivity of his own palate and by the example of Auguste Gusteau (Brad Garrett), a famous chef who insists — more in the manner of Julia Child than of his real-life haute cuisine counterparts — that “anyone can cook.”

I was impressed with this film on many levels, especially the incredible attention to details. Bird’s framing of Ego was superb. Go! Brad Bird directs (he also lead the Incredibles).

THE herd instinct is as powerful in humans as in other animal species.

Anyone who doubts it should rent “What Do You Say to a Naked Lady?”, the 1970 film by Allen Funt, the creator of “Candid Camera.” The money scene portrays a man responding to a help-wanted ad. He is directed to a waiting room occupied by men who appear to be other job seekers but are actually Mr. Funt’s confederates. At no apparent signal, these men stand and begin to disrobe. The hapless job seeker’s dismay is evident. Yet, after a few moments, he, too, stands and disrobes. At scene’s end, the men are standing naked, apparently waiting for whatever comes next.

Clearly, the herd instinct can lead us astray. For the most part, however, the impulse to emulate others serves us well. After all, without drawing on the wisdom and experience of others, it would be almost impossible to cope with the stream of complex decisions we confront.

Frank believes that the SUV craze started when Robert Altman’s “The Player” was released in 1992 (Great Movie). “The film’s lead character, the studio executive Griffin Mill (played by Tim Robbins), could have bought any vehicle he pleased. His choice? A Range Rover with a fax machine in the dashboard.”

Knotts first rose to prominence in the late 1950s, joining Louis Nye and other comedy players on “The Steve Allen Show.” In 1961, United Artists Records released a comedy album titled “Don Knotts: An Evening with Me,” which featured various takeoffs on the “nervous man” routine the comic had made famous on Allen’s show. One of the bits, “The Weatherman,” concerned a TV forecaster forced to wing it after the meteorology report fails to make it to the studio by air time.

During the mid- to late 1960s, in a largely unsuccessful bid for major film stardom, Knotts made a series of family films that many connoisseurs now say were critically underappreciated at the time. These include “The Incredible Mr. Limpet” (1964), “The Ghost and Mr. Chicken” (1966) and “The Reluctant Astronaut” (1967). The latter two were made as part of a five-picture deal with Universal Pictures.

Much more on Don Knotts.

Within the entertainment industry, Errol Morris holds a chameleon position. To the commercial production world, he’s established as a highly successful director, both innovative and intelligent. (He’s one of the only, if not the only, director of TV commercials who has written an opinion-page article published in The New York Times.) Within talent and advertising agencies, he is known for his exceptional off-kilter vision, and honored in ways usually reserved for noncommercial artists. (In November 1999, his work received a full retrospective at the Museum of Modern Art. In 2002, the organizers of the Academy Awards asked him to direct the short film that introduced the annual Oscars ceremony; it featured a series of real-life characters—some well-known, some everyday citizens—describing their passion for
movies.) In a 2004 Adweek article honoring Morris’s contributions as someone who “rises above the fray to create work that resonates and inspires,”

Reuters has published a look at the presence of bloggers at Sundance, the popular independent film festival held each year in Park City, Utah.

I’ve been collecting data on just how bad it’s getting in the music industry, and this useful list of the 100 all-time bestselling albums offered another lens on the meltdown. I looked up the release dates of each and grouped them in half-decade bins. The data speaks for itself