The Madison Rep has a fabulous deal for new subscribers: 50% off 4 and 5 play packages. Check it out. Full disclosure: Artistic Director Rick Corley is a good friend.
For example, a 5 play package Isthmus Preview Series is $50/person (Wed night) or $63 (Thu night)!

Mark Warner, an unannounced candidate for the presidency, is going to be interviewed in Second Life on Thursday at 3:30pm (eastern time, I think).

Warner is someone to watch. He’s also played the NASCAR card.

“[R]umors inside the industry suggest that Iran is being forced to charter 20 huge oil tankers to hold 40 million barrels of its crude; apparently, Iran has run out of space to store all the oil it has pumped but not yet sold.”

This relation between the number of people who aren’t of working age and the number of people who are is captured in the dependency ratio. In Ireland during the sixties, when contraception was illegal, there were ten people who were too old or too young to work for every fourteen people in a position to earn a paycheck. That meant that the country was spending a large percentage of its resources on caring for the young and the old. Last year, Ireland’s dependency ratio hit an all-time low: for every ten dependents, it had twenty-two people of working age. That change coincides precisely with the country’s extraordinary economic surge.

Today’s meeting of Altria’s board may bring Kraft — which sells food carrying the Maxwell House, Nabisco and Oscar Mayer labels, among others — one step closer to its goal.

With the last major legal challenge over marketing practices by the tobacco industry having cleared two weeks ago, Altria’s 11-member board is likely to discuss the timing of a much-anticipated and imminent corporate overhaul. But Altria’s board is not expected to announce a Kraft spinoff after the meeting.

Wall Street analysts who follow Altria say they expect the company, which has been planning an overhaul since 2004, to take its time in making a final decision on the timing of what would be one of the largest tax-free corporate spinoffs.

While most VoIP phones require you to be connected to your PC via a USB cable our Cordless VoIP phone uses a wireless signal that allows you to roam your house or office while using Skype. You may use the phone for both PC-to-PC and PC-to-Phone calling.

Federal Funding Accountability and Transparency Act of 2006 introduced by Mr. COBURN (for himself, Mr. OBAMA, Mr. CARPER, and Mr. MCCAIN) shall:

SEC. 2. FULL DISCLOSURE OF ENTITIES RECEIVING FEDERAL FUNDING.
(a) In General-
(1) WEBSITE- Effective beginning January 1, 2007 and subject to paragraphs (2) and (3), the Office of Management and Budget shall ensure the existence and operation of a single updated searchable database website accessible by the public at no cost that includes for each entity receiving Federal funding–
(A) the name of the entity;
(B) the amount of any Federal funds that the entity has received in each of the last 10 fiscal years;
(C) an itemized breakdown of each transaction, including funding agency, program source, and a description of the purpose of each funding action;
(D) the location of the entity and primary location of performance, including the city, State, congressional district, and country;
(E) a unique identifier for each such entity and parent entity, should the entity be owned by another entity; and
(F) any other relevant information.
(2) INITIAL DATA- Effective January 1, 2007, the website shall include data for fiscal years 2006 and 2007.
(3) PREVIOUS FISCAL YEARS- Not later than January 1, 2009, information required by this section shall be posted on the website for fiscal years 1999 through 2005.

Evidently, this quite useful initiative has been “put on hold” by a single senator. Here’s a tally of Senators who said that they did not place the hold (a single Senator can evidently place a hold on legislation…). Senator Feingold, to his credit has apparently announced that he was not responsible for the hold. I phoned Senator Kohl’s DC office this morning. A staffer said that she “does not have a statement on this issue”.
I hope all government entities publish a searchable database as envisioned by S.2590. Earmarks, another gross abuse of our system – are just now getting some sunshine.
UPDATE: Paul Kiel says that a Kohl staffer says that he did not place a hold on S.2590.

Dutch artist/engineer Theo Jansen makes unbelievable kinetic sculptures; it’s as if da Vinci had access to PVC. This video (a BMW ad, as it happens) shows off some of his walking machines in motion on the beach. Wired covers the genesis and evolution of Jansen’s work, and you can see his two-ton Animaris Rhinoceros Transport on the move in this video. Many more photos are on his site. [Via] [For more on kinetic scuplture, see previous entry.] 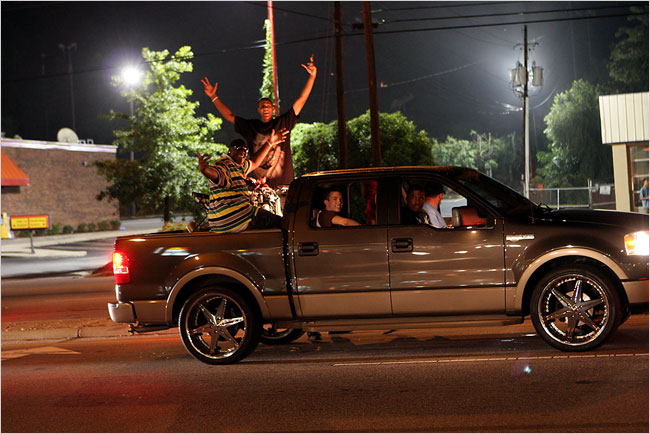 The Revenge of the F-150; Alex Williams:

Moments later, the sources of the screech — a couple of burly, whiskered country boys in their mid-20’s, one with a Confederate battle flag tattoo on his bulging bicep — had chugged off in the opposite direction down Patton Avenue in a mud-spattered white pickup. They were swallowed into a seemingly endless queue of gurgling Camaros, fume-spewing 70’s muscle cars and tidy Japanese econoboxes (some likely borrowed from mom), cruising along this wide suburban boulevard.

“Those are ‘high school hangouts,’ ” Will Thompson, 17, said dismissively about the older guys, as his own black Chevrolet pickup crept in the opposite direction. “They graduated from high school like five years ago,” explained Will, who wore a “Sanford and Son” T-shirt and a camouflage hunting cap. “It’s like, ‘You graduated, come on!’

This is to give notice that the Office of the Madison City Clerk will conduct a public test of the electronic voting equipment (including the AutoMark Voter Assist Terminals) in accordance with Section 5.84(1) Wisconsin State Statutes: