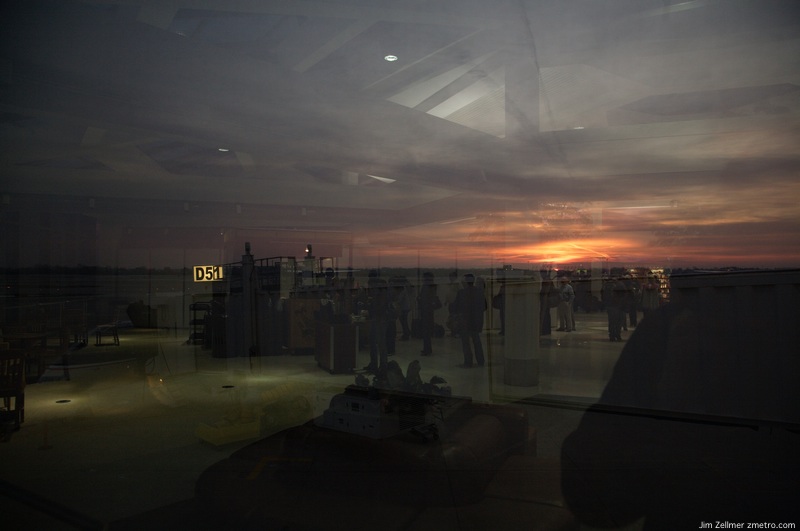 Queueing for Starbucks at the Milwaukee Airport.


Sir Gulam Noon did not duck when he heard the first sounds of gunfire in his suite on the third floor of the Taj Mahal Hotel.

Britain’s most high profile Asian businessman had booked a table at the restaurant but at the last minute he felt slightly ill so changed his mind and decided to have dinner in his room with his brother and two business associates. “It probably saved my life, the restaurant was the first place the terrorists went.”

Sir Gulam – who is known as the “Curry King”, selling 1.5 million ready made Indian meals a week in Britain – was born in Bombay and started his career running a sweet stall in the city.

At first he says, “we thought we were hearing wedding fireworks, it sounded as though crackers were being let off in the lobby”. He and his brother looked out of the window expecting a fireworks display but instead “we saw men rushing into the building and people fleeing”.


The brilliant mind of Kevin Kelly wrote about the origins of science a few weeks ago (The Origins of Progress, Anachronistic Science). If you want to expand your mind, read Kevin Kelly, for his is one of the most significant voices of contemporary culture. But Kelly uses science to try and answer a question about science that perplexes him: Why was science “discovered” in Western Civilization and not before? It’s a fascinating question, and one that is terribly important for us today, because we’re at the beginning of the post-modern, post-colonial era in the West.


I’ve been studying and writing about postmodernism for over ten years, and I see the conflicts of a culture in change everywhere. I actually prefer the term “postcolonial,” because, from a practical perspective, it fits better. Colonialism is a top-down, “teach a man to fish” philosophy ideally suited to the application of logic, reason and science. Where it runs into problems is when the top wants to maintain its position on top, but I digress.


The thing that Kelly refuses to acknowledge — as do most people of science — is the role of faith in the origins of science, and that brings me back to Thanksgiving 2008.


We’re in the midst of a second Gutenberg moment, in which knowledge (The Jewel of the Elites) is spreading throughout the globe like a giant mushroom cloud, and I would argue that this significantly will alter any future projections, just as the first Gutenberg moment did centuries ago.


Minutes after outbound flights at Suvarnabhumi International Airport were suspended, hundreds of demonstrators — some masked and armed with metal rods — broke through police lines and spilled into the passenger terminal.

The road to Suvarnabhumi.


Seven of the top ten debtor nations are included in the world’s top ten economies. Not surprising. This is largely a result of widespread availability of affordable credit, and relatively large middle classes in these countries, and consequently a large ratio of home/property owners. Most popular rhetoric on the topic would claim that wealthy countries have grown accustomed to being wealthy and they are enthralled by consumerism – it could be argued that this high level of debt could be a result of a culture that is used to and willing to buy now, and pay later…even if it means with interest.


According to our data, Japan has the highest positive income (in gross terms) at US $2,892 Billion. Similarly, the US economy is $1,594 Billion. At the other side of the spectrum, Great Britain’s income to debt ratio is a US -$7,677 Billion, and that of France is -$1,890 Billion. But what do these statistics mean on an individual level? Well, if you were to boil down what each person in this country contributed to the nation’s income vs. debt ratio, the results would be startling. We would have to take into consideration the nation’s population to better understand this. And some may be surprised to see that the US does not fare quite as bad as imagined, comparatively:


A statewide public records audit found that one in 10 requests for basic documents were denied or ignored by local governments.


Another two in 10 requests were fulfilled only after records custodians required the requesters to identify themselves or explain why they wanted the documents, in violation of state law.


The audit, conducted by the Wisconsin Freedom of Information Council and the University of Wisconsin-Madison School of Journalism and Mass Communication, involved 318 public records requests filed in 65 counties.


“We were not trying to trick anyone,” says Bill Lueders, the Council’s elected president and news editor of Isthmus newspaper. “We asked for basic information that no one should have any problems getting. And yet there were problems.”


It’s a Friday night in Milwaukee, and a crowd of young men in jackets, jeans and boots is beginning to assemble outside the Riverside Theater, the old vaudeville hall and movie theater transformed into a modern music shrine.


Behind the locked doors, inside the grand lobby, the ticket takers, ushers and bartenders go through their final countdown, making sure the jumbo-size $6 bottles of Sierra Nevada Pale Ale are on ice, the floors are swept, the cash registers are ready.

Eight floors above the lobby, members of the rock band My Morning Jacket sit down to eat dinner in a warm, inviting room that is done up in shades of gray, with banquet tables covered in white linen and a Mortal Kombat II arcade game stashed in a corner. A waitress serves food from a buffet table overladen with meats, vegetables, salads and sweets. Some of the band members and crew cut into slabs of prime rib the size of Frisbees. Others pick at salads.

Amid the calm before a rock ‘n’ roll storm sits Gary Witt, a 49-year-old with a shaved head, trimmed mustache and goatee. He dresses casually in jeans and work shirt.


The Fed’s highly leveraged balance sheet will make it hard to fight inflation.


IF THE FEDERAL RESERVE BANK WERE A COMMERCIAL LENDER, it would be a candidate for receivership, based on its capital ratios. Bank examiners generally view any lender with a ratio below 2% to be dangerously undercapitalized. The Fed’s current capital ratio, or capital as a percentage of assets, is 1.9%.

The Fed has provided so many loans and emergency credits — to banks, brokers, money funds and foreign countries — that its balance sheet, viewed one way, is as leveraged as any hedge fund’s: Its consolidated assets amount to 53 times capital. Only 11 months ago, its leverage on this basis was a more modest 25 times, and its capital ratio 4%. A caveat: Many of the loans are self-liquidating facilities that will disappear in a few months if the financial crisis eases.


Although the Fed’s role as a central bank is much different from the role of a private-sector operation, the drastic changes in the size and shape of its balance sheet worry even some long-time Fed officials. Its consolidated assets have swelled to $2.2 trillion from $915 billion in about 11 months, and contain at least a half-dozen items that weren’t there before. Some, like a loan to backstop the purchase of a brokerage, Bear Stearns, are unprecedented. (See table for highlights.)