The term media has many different definitions. Published media is any media made available to the public. Mass media refers to all means of mass communication. Broadcast media refers to communications delivered over mass electronic communication networks.
News media refers to mass media focused on communicating news. Media meshing refers to the act of combining multiple independent pieces of communication media to enrich an information consumer’s experience. New media refers to media that can only be created or used with the aid of modern computer processing power.
The history of “media” has been designed, developed and pushed from a few at the top to the masses at the bottom. This model has been used to influence public opinion about anything, everything and everywhere. The old model was an important factor in driving historical economies.

The Coronado Club, in downtown Houston, is an unlikely place to contemplate the end of life as we know it. Plush and hushed, with solemn black waiters in crisp black jackets, the private enclave practically exudes wealth and stability. Captains of local industry enter and exit purposefully, commanding their usual tables, wearing the best suits. Everybody knows everybody else. The light is flattering. The wine room is nicely stocked.
But here is Matthew R. Simmons, the head of one of the largest investment banking firms in the world, stabbing at his salad greens and heatedly discussing the chaos to come when, as he has long predicted, global oil production peaks and for the rest of our time on earth we struggle and suffer and barely endure under a diminishing supply of fuel until it disappears entirely. This idea is known as “peak oil,” and Simmons is its most fervent, and fearsome, apostle. As he puts it, “I don’t see why people are so worried about global warming destroying the planet—peak oil will take care of that.”
Slashing through his entrée, barely stopping for breath, he describes a bleak future, in which demand for oil will always surpass supply, the price will continue to rise—“so fast your head will spin”—and all sorts of problems in our carbon-dependent world will ensue. As fuel shortfalls complicate global delivery routes and leave farmers unable to run their tractors, we will face massive food shortages. Products made with petroleum, from asphalt and plastic to fabrics and computer chips, will also become scarcer and scarcer. Standards of living will fall, and people will not be able to pay their debts. Lending will tighten, and eventually there will be major defaults. Growth will cease, and hoarding will set in as oil becomes increasingly rare. Then, according to Simmons, the wars will begin. That is the peak oil scenario.

Earmark is a dirty word.
That’s the tacit message of Taxpayers for Common Sense, which describes itself as a progressive nonpartisan budget watchdog.
An earmark is a project in their district for which members of Congress designate funds. Earmarks often are awarded without public hearings or other congressional debate over their merits. Congress inserted 12,881 earmarks worth $18.3 billion into this year’s spending bills, according to the watchdog group.
While some taxpayers and their representatives decry earmarks as boondoggles and wasteful government spending, others defend them as a way to accomplish important objectives while bringing jobs and benefits to their constituents.

Steve Ellis, vice president of Taxpayers for Common Sense, said: “It’s really easy to isolate an earmark and say it’s a good thing, but if we do that, we miss the overall context. It’s a zero-sum game. We need to make sure we spend every penny wisely.”
Obey has his own reservations about the system and said last summer on the “Bill Moyers Journal” television show:
“The reason I hate earmarks is because they suck everybody in. They suck them into the idea that we have to be ATM machines for our districts, and so they focus on the tiny portion of most bills that are earmarks instead of focusing on the policy that is represented by the legislation that we produce.

Unless you’ve been avoiding television, newspapers, and all other forms of mass media for the past few months, you’ve probably seen Democratic presidential candidate Barack Obama’s “Change We Can Believe In” and “Stand for Change” banners. The typophiles among you have realized that the “change” font Obama’s campaign uses is Gotham, designed by Hoefler & Frere-Jones, originally as a commission for GQ Magazine.

The film Helvetica is well worth watching.

I recently phoned the Streets Department to ask that they move a mountain of snow blocking a highly travelled sidewalk crossing, one that is frequently used by students (and local walkers along with pets). 24 hours later, said snow had been somewhat moved to make a useful walkspace through the mountain. While we still have glaciers on some roads, I’d say the Street Department has done a decent job with the present endless winter. 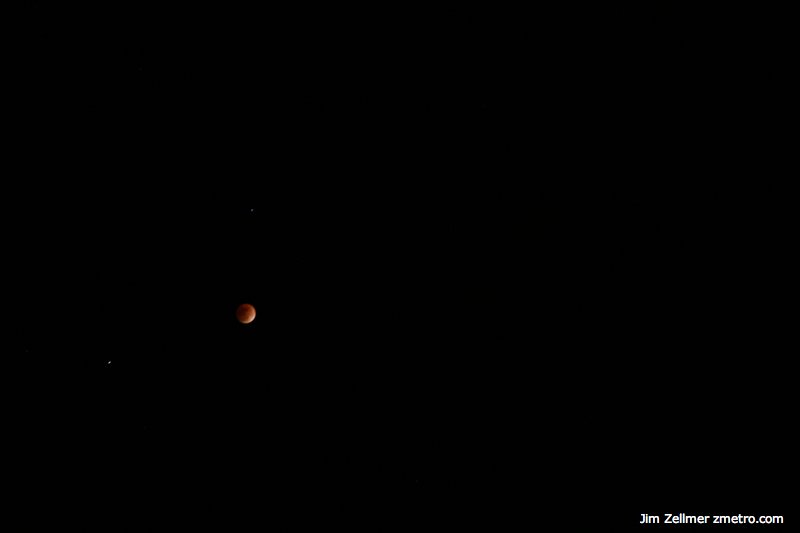 Not the best shot, but the sky presented a glorious view of God’s handiwork.

I have known and liked Chuck Spinney for a very long time, since I wrote about him and his original “defense reform” colleagues, notably John Boyd and Pierre Sprey, in the Atlantic and in National Defense in the early 1980s. Boyd of course originated the concept of the “OODA Loop.” This was the idea, derived from Boyd’s “Patterns of Conflict” briefing, that the victor in any conflict would not necessarily be the stronger or better-prepared party. Rather it would be the one who recognized changing realities, and chose and implemented the right new course of action, faster than the opponent. Boyd came up with the theory by analyzing aerial combat among fighter planes, but in his view it could be applied to every sort of human contest, from sports to business to armed conflict.
(OODA stands for Observe, Orient, Decide, and Act. To react to changing reality faster than the opponent can, or to interfere with the opponent’s ability to perceive realistically what is happening to him, is to “get inside his OODA loop.” Everything anyone would ever want to know about Boyd, Spinney, Sprey; about their contemporary colleagues like Chet Richards, Donald Vandergriff, WIlliam Lind, GI Wilson, etc; and about OODA loops and the related concept of 4GW, or Fourth Generation Warfare, can be found at two excellent, related “Defense and the National Interest” sites, here and here.)
And the theory also applies to politics, as Spinney has argued in a recent item about the contest for the Democratic nomination. His analysis, “Is Obama inside Hillary’s OODA loop?” comes after the jump. The incidents he mentions are all familiar; what’s at least a little new is his combination of them in Boyd-style perspective — in particular Bill Clinton losing his sense for how the battle is shifting. I am posting this before the Wisconsin results are known, and before the (in my view bogus) “plagiarism” flap has died down, so that Spinney’s observation can be tested against those results. 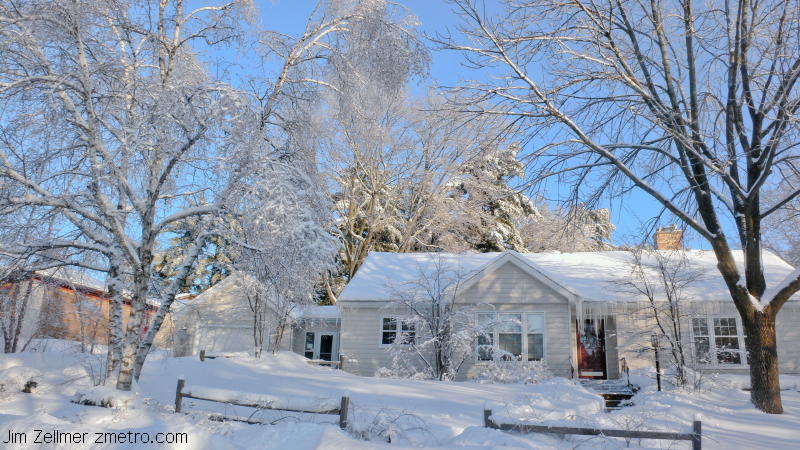 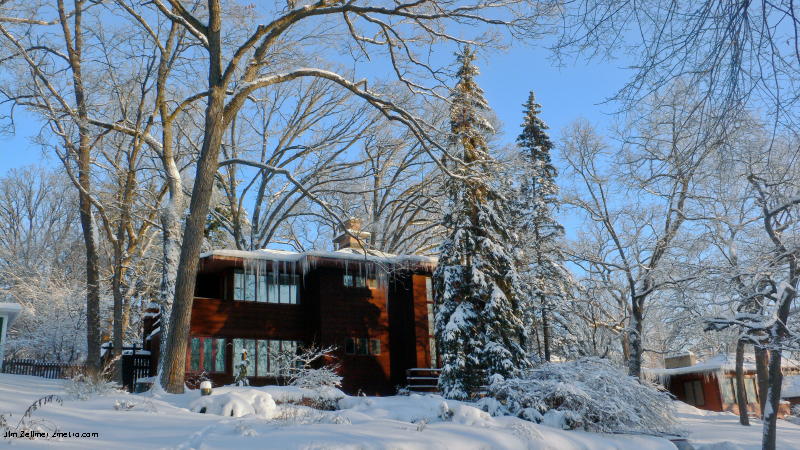 A beautiful, yet cold morning for Wisconsin’s spring primary election. While the endless winter continues, it is great to see the sun. Note the large icycles on these homes. Inevitably, spring will arrive.

“Don’t be evil”, the motto of Google, is tailored to the popular image of the company–and the information economy itself–as a clean, green twenty-first century antidote to the toxic excesses of the past century’s industries. The firm’s plan to develop a gigawatt of new renewable energy recently caused a blip in its stock price and was greeted by the press as a curious act of benevolence. But the move is part of a campaign to compensate for the company’s own excesses, which can be observed on the bansk of the Columbia River, where Google and its rivals are raising server farms to tap into some of the cheapest electricity in North America. The blueprints depicting Google’s data center at The Dalles, Oregon are proof that the Web is no ethereal store of ideas, shimmering over our heads like the aurora borealis. It is a new heavy industry, an energy glutton that is only growing hungrier.

I wonder how the economics and energy consumption details compare between growing web applications and legacy paper based products?

Cara Harshman via a friend’s email:

This will certainly be more fodder for the courts. Much more on Wisconsin open records here.