Paul Chong was searching for paradise on a beach in Vietnam.
Mr. Chong, the head of business development at Singapore’s Banyan Tree Hotels & Resorts, came here on a weeklong mission last August to scout sites for a luxury resort. He had journeyed by car and plane up the coast from Ho Chi Minh City before arriving at a tiny fishing village near the central city of Da Nang. In a remote cove reachable only by rowboat, he and three colleagues explored a two-mile stretch of beachfront.
“We fell so much in love with the site that we didn’t leave until it was pitch black,” Mr. Chong recalls. In March, Banyan Tree won a license to begin building the Laguna Vietnam, a $270 million complex of hotels, villas and spas.


A confidential report prepared for senior executives at Wal-Mart Stores concludes, in stark terms, that the chain’s traditional strengths — its reputation for discounts, its all-in-one shopping format and its enormous selection — “work against us” as it tries to move upscale.
As a result, the report says, the chain “is not seen as a smart choice” for clothing, home décor, electronics, prescriptions and groceries, categories the retailer has identified as priorities as it tries to turn around its slipping store sales, a decline likely to be emphasized Friday during Wal-Mart’s shareholder meeting.
“The Wal-Mart brand,” the report says, “was not built to inspire people while they shop, hold their hand while they make a high-risk decision or show them how to pull things together.”


Coke is also encountering a seismic shift in consumer preferences — of the sort that is challenging the newspaper business and hamstringing automakers. Worried about their health and lured by new drinks, Americans are reaching for bottled water, sports drinks, green teas and juice instead of soda. The decline in soft-drink sales isn’t just for full-calorie sodas like Coca-Cola Classic, with about 10 teaspoons of sugar per 12-ounce can. Sales of diet soda are declining too, in part because artificial sweeteners make some consumers nervous.
The problem is so serious that Coke executives no longer refer to soda as just plain “soda.” “Soft drink,” “pop” and “carbonated beverage,” are also verboten. Instead, the favored term in Atlanta these days is “sparkling beverage.” 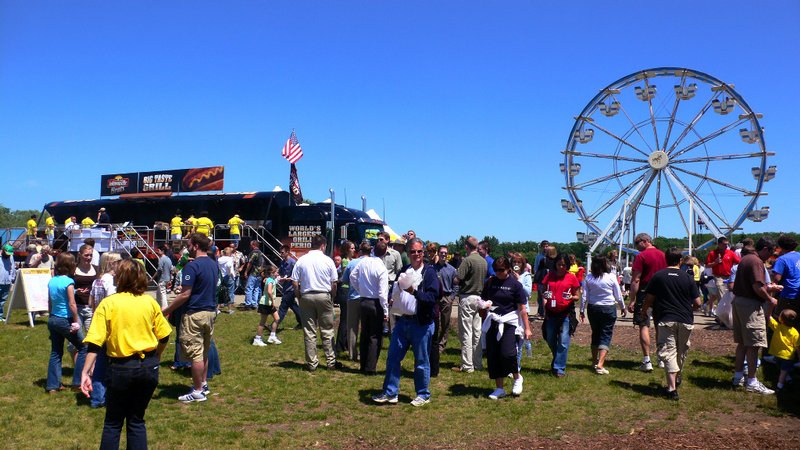 The Bratfest folks announced that they had sold over 4000 brats during their first hour today. The path to the brat sales tent [image] is surrounded by a stage, rides, games, community tents [image] and some advertising [image].
And, of course, the requisite Oscar Meyer weinermobile [image].
The $1.50 veggie brat made for a good lunch on a pleasant Friday.


F YOU thought you could protect your privacy on the web by lying about your personal details, think again. In online communities at least, entering fake details such as a bogus name or age may no longer prevent others from working out exactly who you are.
That is the spectre raised by new research conducted by Microsoft. The computing giant is developing software that could accurately guess your name, age, gender and potentially even your location, by analysing telltale patterns in your web browsing history. But experts say the idea is a clear threat to privacy – and may be illegal in some places.
Previous studies show there are strong correlations between the sites that people visit and their personal characteristics, says software engineer Jian Hu from Microsoft’s research lab in Beijing, China. For example, 74 per cent of women seek health and medical information online, while only 58 per cent of men do. And 34 per cent of women surf the internet for information about religion, whereas 25 per cent of men do the same.


Hasan Elahi whips out his Samsung Pocket PC phone and shows me how he’s keeping himself out of Guantanamo. He swivels the camera lens around and snaps a picture of the Manhattan Starbucks where we’re drinking coffee. Then he squints and pecks at the phone’s touchscreen. “OK! It’s uploading now,” says the cheery, 35-year-old artist and Rutgers professor, whose bleached-blond hair complements his fluorescent-green pants. “It’ll go public in a few seconds.” Sure enough, a moment later the shot appears on the front page of his Web site, TrackingTransience.net.
There are already tons of pictures there. Elahi will post about a hundred today — the rooms he sat in, the food he ate, the coffees he ordered. Poke around his site and you’ll find more than 20,000 images stretching back three years. Elahi has documented nearly every waking hour of his life during that time. He posts copies of every debit card transaction, so you can see what he bought, where, and when. A GPS device in his pocket reports his real-time physical location on a map.


But the new majority is already skirting its own reforms.
Perhaps the biggest retreat from that pledge came this week, when House Appropriations Committee Chairman David R. Obey (D-Wis.) told fellow lawmakers that he intends to keep requests for earmarks out of pending spending bills, at least for now. Obey said the committee will deal with them at the end of the appropriations process in the closed-door meetings between House and Senate negotiators known as conference committees.
Democrats had complained bitterly in recent years that Republicans routinely slipped multimillion-dollar pet projects into spending bills at the end of the legislative process, preventing any chance for serious public scrutiny. Now Democrats are poised to do the same.
“I don’t give a damn if people criticize me or not,” Obey said.
Obey’s spokeswoman, Kirstin Brost, said his intention is not to keep the projects secret. Rather, she said, so many requests for spending were made to the appropriations panel — more than 30,000 this year — that its staff has been unable to study them and decide their validity.
For instance, a new emergency spending bill for the Iraq war passed by the House this month had no specific earmarks, but it included a clause declaring that all the projects lawmakers had included in a previously vetoed bill were, in effect, included.
Likewise, the House Appropriations Committee report accompanying the Iraq supplemental spending bill vetoed by President Bush boldly declared: “This bill, as reported, contains no congressional earmarks, limited tax benefits, or limited tariff benefits.” But it set aside money for pet projects including $25 million for spinach, $60 million for salmon fisheries and $5 million for aquaculture.
“Absolutely nothing has changed,” said the Center for Defense Information’s Winslow T. Wheeler, a Senate appropriations and national security aide who worked for both Democrats and Republicans over three decades before stepping down in 2002. “The rhetoric has changed but not the behavior, and the behavior has gotten worse in the sense that while they are pretending to reform things, they are still groveling in the trough.”

A 2006 spending bill included $6.9M for Obey’s Northern Wisconsin District. Much more on earmarks, including those spread around Madison, here.
More from the Examiner here.


On October 24, 1946, not long after the end of World War II and years before the Sputnik satellite opened the space age, a group of soldiers and scientists in the New Mexico desert saw something new and wonderful—the first pictures of Earth as seen from space.
The grainy, black-and-white photos were taken from an altitude of 65 miles by a 35-millimeter motion picture camera riding on a V-2 missile launched from the White Sands Missile Range. Snapping a new frame every second and a half, the rocket-borne camera climbed straight up, then fell back to Earth minutes later, slamming into the ground at 500 feet per second. The camera itself was smashed, but the film, protected in a steel cassette, was unharmed.
Fred Rulli was a 19-year-old enlisted man assigned to the recovery team that drove into the desert to retrieve film from those early V-2 shots. When the scientists found the cassette in good shape, he recalls, “They were ecstatic, they were jumping up and down like kids.” Later, back at the launch site, “when they first projected [the photos] onto the screen, the scientists just went nuts.”


Today’s front-page English-language headlines, from the (state-controlled) China Daily and Shanghai Daily:
Why we love them:
1) Harmony of emphasis between the two papers. (Harmony as well with online version of China Daily, which leads with “Wu Yi: Strategic talks are a complete success.”)
2) Removal of doubt and worry from readers’ minds — in this case, foreign readers in China.