Fios also has helped future-proof Verizon’s network. While its cable competitors buckle under the pressure of peer-to-peer traffic on their networks, Verizon has enough capacity in its network, thanks to its fiber upgrades, to weather the storm unscathed and work on its own timetable to find more efficient ways to handle peer-to-peer traffic.
Mark Wegleitner, Verizon’s senior vice president of technology in charge of broadband and consumer services, has helped develop and drive Verizon’s fiber strategy. I sat down with him at the Nxtcomm trade show in Las Vegas last week to talk about a wide variety of topics, including the controversy over Comcast’s treatment of BitTorrent traffic, faster speeds for Fios, and what the company plans to do next when it reaches its 2010 goal of passing 18 million homes with fiber.

The Madison area is stuck with an aging telco infrastructure. Neither AT&T, nor TDS have any plans to upgrade their networks to the home. Not good…. Verizon FIOS Deployment Map.

Internet traffic is growing faster than at any time since the boom of the late-1990s. Places like Chattanooga are trying hard not to get stuck in the slow lane.
Some 60 towns and small cities, including Bristol, Va., Barnsville, Minn., and Sallisaw, Okla., have built state-of-the-art fiber networks, capable of speeds many times faster than most existing connections from cable and telecom companies. An additional two dozen municipalities, including Chattanooga, have launched or are considering similar initiatives.
The efforts highlight a battle over Internet policy in the U.S. Once the undisputed leader in the technological revolution, the U.S. now lags a growing number of countries in the speed, cost and availability of high-speed Internet. While cable and telecom companies are spending billions to upgrade their service, they’re focusing their efforts mostly on larger U.S. cities for now.
Smaller ones such as Chattanooga say they need to fill the vacuum themselves or risk falling further behind and losing highly-paid jobs. Chattanooga’s city-owned electric utility began offering ultrafast Internet service to downtown business customers five years ago. Now it plans to roll out a fiber network to deliver TV, high-speed Internet and phone service to some 170,000 customers. The city has no choice but to foot the bill itself for a high-speed network — expected to cost $230 million — if it wants to remain competitive in today’s global economy, says Harold DePriest, the utility’s chief executive officer.

Madison’s pitiful broadband infrastructure could certainly use a shot in the arm.

Cable is not a monopoly. You can choose from any cable company you want in America, just by moving your house.

The US is in desperate need of 100Mbps “big broadband.” That’s the conclusion of a new report from EDUCAUSE (PDF), a group that represents IT managers at over 2,200 colleges and universities. But these 100Mbps connections are coming slowly; in the meantime, countries like Japan already have them. To avoid falling further behind, the report calls for a national broadband policy to be passed this year, one that includes $100 billion for a fiber-to-the-home infrastructure that will connect every household and business in the country.
The report opens by citing the familiar, dreary facts: US broadband might now be widely available, but it’s slow and relatively expensive. Between 1999 and 2006, the US fell from third place to 20th in the International Telecommunications Union’s broadband usage measurements. When it comes to average connection speeds, the US isn’t beaten just by Japan but also by France, Korea, Sweden, New Zealand, Italy, Finland, Portugal, Australia, Norway, Luxembourg, the United Kingdom, and Germany. And it’s not about population size or density, either; Finland, Sweden, and Canada beat us on most broadband metrics despite having lower population density. Finally, we’re getting beat on price, coming in 18th worldwide when it comes to cost per megabyte.

Even as Sprint tentatively rolls out the XOHM network here in the States, the largest Indian telecom company is planning to build a mobile WiMax network covering three states on the subcontinent capable of serving 250 million people. State-owned Bharat Sanchar Nigam Limited is leaning on Soma Networks to build the broadband-speed network in response to government requirement that 20 million broadband lines be in service by 2010. The WiMax rollout will first hit the largest and most-connected states, but BSNL is planning on extending the network if things go well. 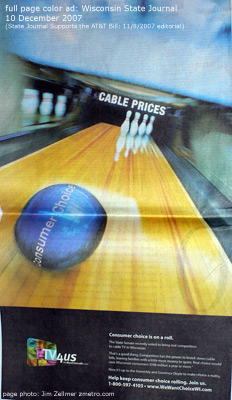 Vergin said he’s pleased he’ll only have to get one state franchise, instead of having to deal with the 33 different municipalities in his service area.
“That’s a big benefit for us and what I think the bill is all about,” he said.
Vergin said his company’s prices won’t be any lower than Charter’s. But he’s convinced his firm will be able to offer better service and options to bundle cable, phone and wireless service.
He said he was opposed to proposed rules that would have required his company to serve entire communities. He also rejected suggestions telecommunications firms should be ordered to run fiber optic to homes and businesses.
“The 100 requirement would limit us,” he said. “And we are running fiber optic to new construction, but not existing buildings. I just don’t think the government should tell us what technology we should use. The market should decide that. I also think have 50 percent of any area covered is better than none.”
…..
(Charles) Higley (Citizen’s Utility Board Executive Director) said he, too, would have liked to have seen a requirement that companies build fiber optic cable.
“We’ve had promises to build it before and it didn’t come,” he said. “In the future, if not already, broadband is an essential service like telephone and electricity. We think government should require essential services.”

The Governor and Legislature appear to have obtained nothing while giving away significant regulatory changes. A disaster for Wisconsin business, schools residents and public agencies. What a deal for the large telcos: spend money on lobbying and advertising but not fiber to the home. Classic rentier approach: milk the slow copper network that we’ve paid for many times over as long as possible.
Keep in mind Verizon’s FIOS, a fiber to the home product installed in many communities [Service Map] – none in Wisconsin.
I recently had the opportunity to use basic FIOS service while on travel. The service was symmetrical – that is, upload and download speeds are the same. Local dsl services are not symmetrical – AT&T and TDS limit upload speeds to a very slow 768kpbs.
This archaic approach is awful for those of us creating, uploading and backing up media (photos, videos and music, not to mention data heavy scientific applications). FIOS provides at least 5 to 50X the speeds of the fastest dsl service generally available in the Madison area. Slow networks limit entrepreneurial opportunities, particularly emerging home based businesses.
Finally, I spoke briefly some years ago with then Gubernatorial candidate Jim Doyle at a campaign event. I mentioned Wisconsin’s very poor broadband infrastructure. He said he understood these issues but could not address them in his first term but hoped to in a second. Will Doyle leave a legacy of aging, slow copper networks? I put a call into Susan Goodwin, Chief of Staff, for an update.
——-
A bit of sugar for AT&T. This giant organization is fully capable of implementing a modern, high quality, fast fiber network. They simply need to make the strategic decision, as Verizon has, to upgrade their network. How much longer must we pay for the old, old copper lines? I’ve received excellent, economical service from AT&T’s cell network.
Background:

His first inkling that something was amiss came in summer 2002 when he opened the door to admit a visitor from the National Security Agency to an office of AT&T in San Francisco.
“What the heck is the NSA doing here?” Mark Klein, a former AT&T technician, said he asked himself.
A year or so later, he stumbled upon documents that, he said, nearly caused him to fall out of his chair. The documents, he said, show that the NSA gained access to massive amounts of e-mail and search and other Internet records of more than a dozen global and regional telecommunications providers. AT&T allowed the agency to hook into its network at a facility in San Francisco and, according to Klein, many of the other telecom companies probably knew nothing about it.
Klein is in Washington this week to share his story in the hope that it will persuade lawmakers not to grant legal immunity to telecommunications firms that helped the government in its anti-terrorism efforts.

If your municipality isn’t looking at creative ways to develop new strategies that include having a state-of-the-art network infrastructure to support economic growth and development, they will be stagnating your property value and quality of life in your area. This was the message I conveyed in a speech on intelligent business campuses at the RTC last week.
Simply put, the three most important words in real estate (“location, location, location”) have turned into “location, location, connectivity” in urban, suburban and rural America.
Corporate site selection committees have included broadband connectivity as one of the top three criteria they are looking for when researching locations for corporate facilities. If your community does not have a good platform for broadband connectivity, it will simply be passed over in favor for one that does.
As a keynote speaker, I also presented these concepts on Tuesday to an urban symposium at the Milwaukee School of Engineering in Milwaukee.
The critical message is the same whether it is for a 5,000-person village in Virginia, a 50,000-person county in downstate Illinois or a 500,000-person city in Wisconsin: “Economic development equals broadband connectivity and broadband connectivity equals jobs.” Without connectivity, there will be little economic development and little if any new jobs.
The table below represents the layers of critical infrastructure that must be taken into account when reviewing regional opportunities.

Some residents of New York, Connecticut, and New Jersey who live inside the boundaries of Verizon’s FiOS network will be the first to be able to take advantage of Verizon’s new 20/20 FiOS service. As the name implies, 20/20 FiOS is a symmetrical 20Mbps connection (same speed in both directions), and it’s one of the first symmetrical services to target the consumer market.
Available today, 20/20 will cost $64.99 per month and will include Verizon’s Internet Security Suite and 1GB of online backup (up to 50GB can be purchased at “competitive rates”).
Susan Retta, the company’s VP of Broadband Solutions, was quick to compare the new plan to cable. “For more than a decade, the Internet has been defined by how quickly you can download content,” Retta said. “Our 20/20 FiOS service changes everything by creating an entirely new category of US broadband where ‘fast’ means fast in both directions.”

A bill introduced into the House of Representatives this week will attempt to spur broadband development in the US by overturning existing state bans on municipal broadband deployments. Titled the Community Broadband Act of 2007, the bill (PDF) is cosponsored by Rep. Rick Boucher (D-VA) and Rep. Fred Upton (R-MI).
Currently, laws in Arkansas, Florida, Missouri, Texas, and a handful of other states prevent cities and towns from installing and operating their own broadband networks. Most of those laws were enacted in the wake of heavy lobbying from the telecommunications industry, which doesn’t want to see competition coming from local governments.
Last year’s attempted rewrite of the Telecommunications Act contained a similar provision but never made it to the floor of the Senate for a vote. With the state of broadband in the US a hot topic of discussion lately, both on Capitol Hill and around the country, Reps. Boucher and Upton may be able to find allies in Congress a bit more easily this time around. The congressmen are hopeful that, should it be passed, the Act would lead to more—and better—broadband options for US citizens.