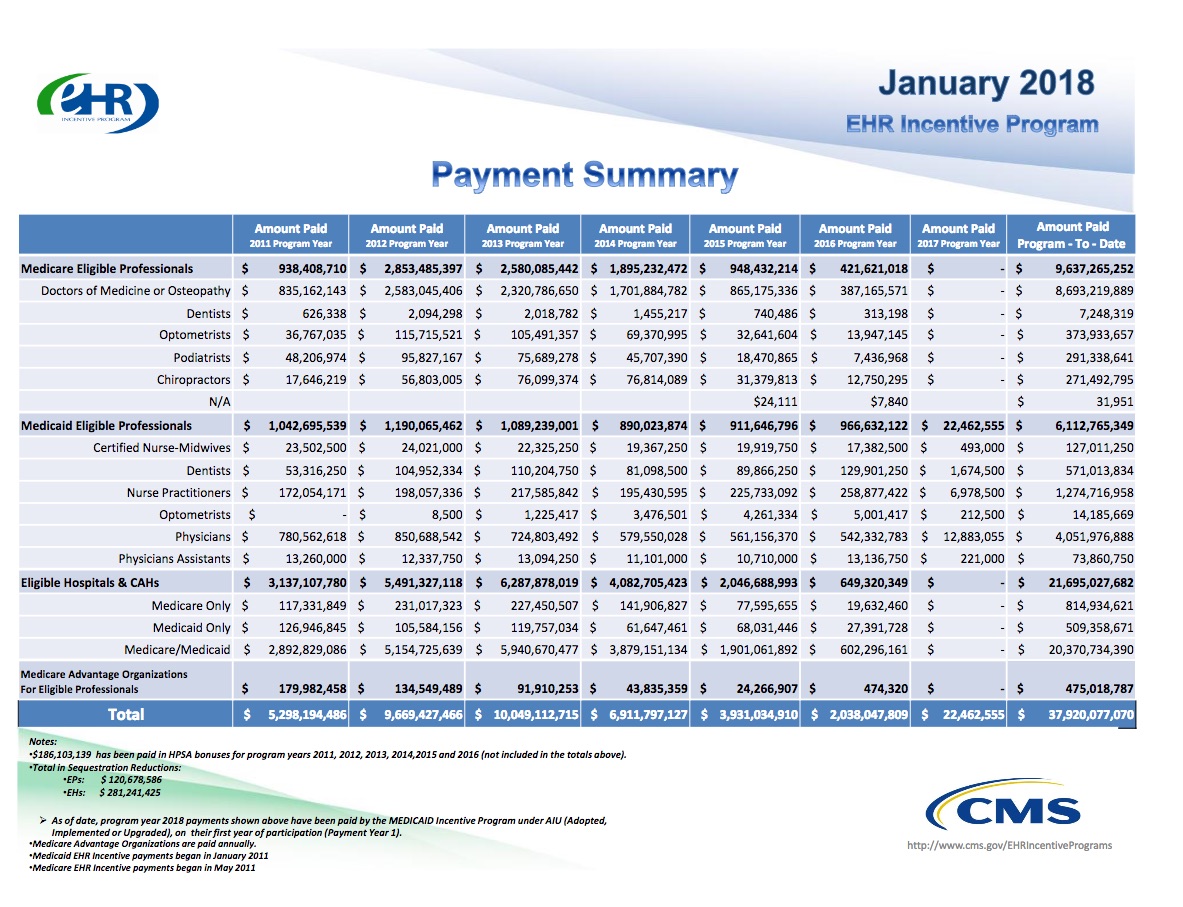 As of January 2018, more than 543,400 health care providers received payment for participating in the Medicare and Medicaid Electronic Health Record (EHR) Incentive Programs. In May 2013, CMS announced that more than half of all eligible health care providers had been paid under the Medicare and Medicaid EHR Incentive Programs.


Part of the company’s recent growth has stemmed from $30 billion in federal incentives included in the recovery act passed in 2009 during the financial crisis.


In February 2009 the U.S. Congress unexpectedly passed the Health Information Technology for Economic and Clinical Health Act (HITECH). HITECH provides up to $27 billion to promote adoption and appropriate use of Electronic Medical Records (EMR) by hospitals. We measure the extent to which HITECH incentive payments spurred EMR adoption by independent hospitals. Adoption rates for all independent hospitals grew from 48 percent in 2008 to 77 percent by 2011. Absent HITECH incentives, we estimate that the adoption rate would have instead been 67 percent in 2011. When we consider that HITECH funds were available for all hospitals and not just marginal adopters, we estimate that the cost of generating an additional adoption was $48 million. We also estimate that in the absence of HITECH incentives, the 77 percent adoption rate would have been realized by 2013, just 2 years after the date achieved due to HITECH.


President Obama and Congress poured $30 billion in taxpayer subsidies into the push for digital medical records beginning in 2009, with only a few strings attached and no safety oversight of the vendors who sell the systems.


Officials at Epic Systems are not commenting on a New York Times report Wednesday that the firm was central in lobbying Congress on a $19 billion “giveaway” (now $37B and growing) to convert all U.S. medical records from paper to computers.

Unfortunately, this $37,920,077,070, and growing taxpayer subsidy has failed. We lack medical record interoperability and costs have continue to grow, substantially.

UPDATE 2: Getting your medical records might not be easy:


“There were overwhelming inconsistencies in information relayed to patients regarding the personal health information they are allowed to request, as well as the formats and costs of release, both within institutions and across institutions,” said Carolyn Lye, the study’s first author.

“We also found considerable noncompliance with state and federal regulations and recommendations with respect to the costs and processing times,” Lye, a medical student, said in a university news release.

The researchers also found that 58 percent of the hospitals charged more than the federally recommended $6.50 for medical records stored electronically. One hospital charged $541.50 for a 200-page record.

The study was published online Oct. 5 in JAMA Network Open.

Stricter enforcement of the patients’ right of access is necessary to ensure that the request process across hospitals is easy to navigate, timely and affordable, Lye suggested.


Among the 83 top-ranked US hospitals representing 29 states, there was discordance between information provided on authorization forms and that obtained from the simulated patient telephone calls in terms of requestable information, formats of release, and costs. On the forms, as few as 9 hospitals (11%) provided the option of selecting 1 of the categories of information and only 44 hospitals (53%) provided patients the option to acquire the entire medical record. On telephone calls, all 83 hospitals stated that they were able to release entire medical records to patients. There were discrepancies in information given in telephone calls vs on the forms between the formats hospitals stated that they could use to release information (69 [83%] vs 40 [48%] for pick up in person, 20 [24%] vs 14 [17%] for fax, 39 [47%] vs 27 [33%] for email, 55 [66%] vs 35 [42%] for CD, and 21 [25%] vs 33 [40%] for online patient portals), additionally demonstrating noncompliance with federal regulations in refusing to provide records in the format requested by the patient. There were 48 hospitals that had costs of release (as much as $541.50 for a 200-page record) above the federal recommendation of $6.50 for electronically maintained records. At least 7 of the hospitals (8%) were noncompliant with