I still don’t know. Fermor didn’t encounter any hermits, though he passed a hermit’s hut, wryly observing that it was the most desolate sight he had ever seen. Perhaps being a hermit was one step too far for the convivial Fermor. Despite his skepticism, I’m sure he would have known what to say: it would have been the ultimate test for this gifted conversationalist.

Periodically the monasteries on Athos crack down on the hermits, accusing them of encouraging personality cults. They undoubtedly do. But I think there is another reason for the crackdowns: the hermits capture a truth about Athos. Having set itself apart, the island lays in waiting for pilgrims and travelers, waiting for our questions, fears and desires, a Christian oracle speaking in voices that are not of this world.

“How do you know that the babysitting money you deposited in the bank a few days ago will still be there next week?” – a conversation with our children during the “Great Recession”.

Argentina features a “pegged” currency in contrast to the many notes that “float”, where the “market” determines the exchange rate. In Argentina’s case, the government sets the peso conversion rate, currently about 8 to the dollar. Yet, the Country’s black market rate, or “dolar azul” currently trades at 13.8 pesos to the dollar.

I experienced this contradiction firsthand during a recent joyous trip to Argentina. A friend suggested taking cash to trade for Pesos. Spot on, our trading ranged from 9.5 to 13 Pesos to the US Dollar. 13 was found in the far north and required perfect US bills, no tears or wrinkles. The exchanges were quick and matter of fact. One money changer asked why more Americans don’t bring cash? “You save at least 50% compared to paying with a credit card.” “Americans must be conditioned to use credit cards”.

Not completely naive, I asked my last counterparty about his rates? “13 to 20. It’s crazy and changes daily”. Another local friend said that they expect a devaluation within a year’s time.

Attractive buys are to be had, from great bottles of wine for $2.00 to inexpensive sumptuous dinners. However, one must not underestimate the cost of such currency swings to local businesses. The proprietor of a delightful restaurant in Buenos Aires’ Palermo neighborhood related how difficult it is to “plan for anything. It’s crazy. I don’t know what to expect from day to day.”

And so, it was, while reading Mander’s article that my mind raced to Solomon’s words, inspired long ago: “All of it is meaningless, a chasing after the wind.” – Ecclesiastes 1-3.

It is remarkable to witness the faith that people put in money, particularly fiat money, or currency that has “value” because the Government says so.

The price of such faith can be seen when observing inflation. Exhibit A: Chobani’s Pomegranate yogurt had long been priced at $0.99/cup at Madison’s Woodmans. It now requires $1.15, an increase of 16%!

United States’ Dollars include the term “In God We Trust“. Obviously, this is all that matters.

2. Politics is the biggest hurdle to developing Argentina’s enormous Vaca Muerta field via the Economist.

Money of the Mind: Borrowing and Lending in America from the Civil War to Michael Milken by James Grant.

Lords of Finance: The Bankers Who Broke the World by Liaquat Ahamed. 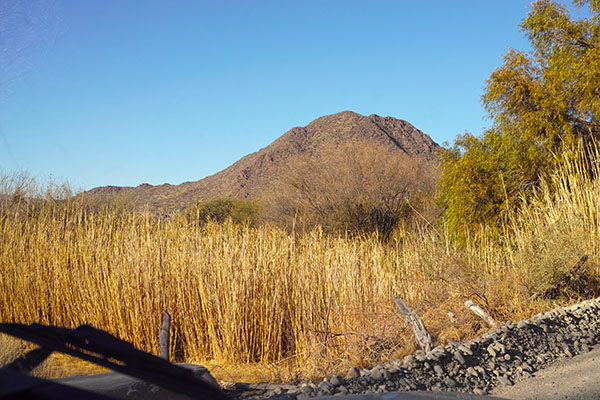 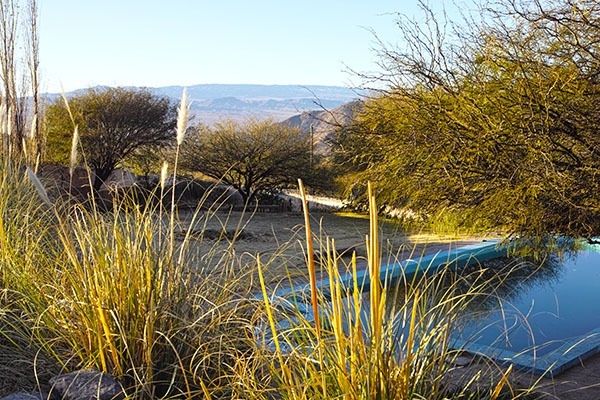 An especially delightful destination after a beautiful drive, La Paya is well worth a visit. The family vineyards, bounded by walnut trees, produce 2000 bottles annually. The grounds and rooms were refreshing, quiet and relaxing. The family’s hearth produced piles of sumptuous empanadas for dinner, followed by a delicious onion soup and an assortment of desserts.

Dive in: Sunrise panoramic image (tap/click and pan in any direction).

Learn more. Thanks to Clark Expediciones for the discovery and arrangements. 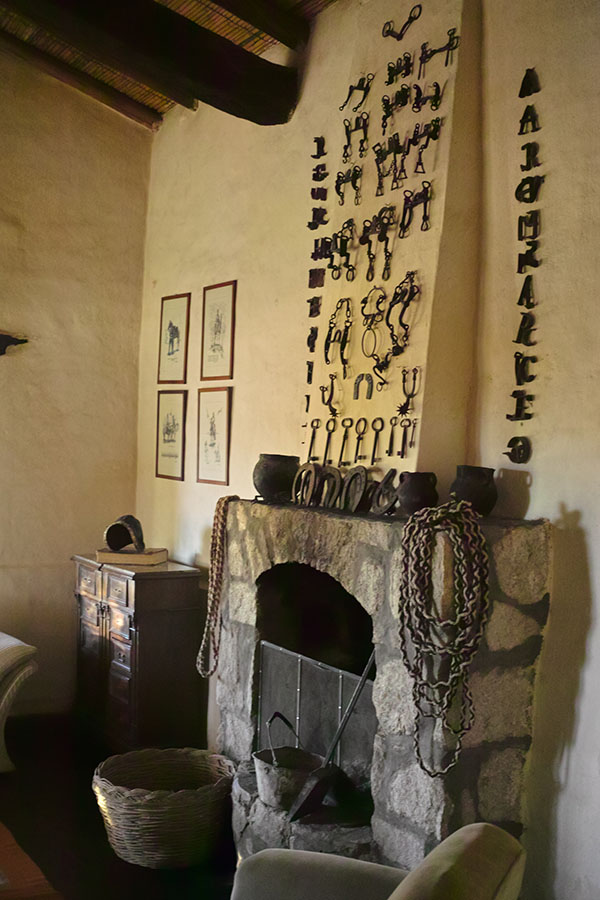 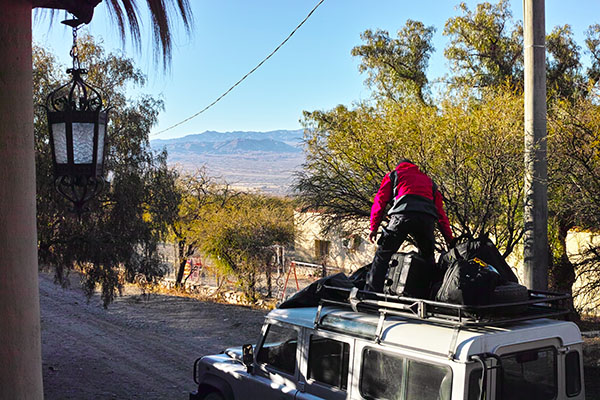 Paul Richardson spent three weeks in Paris recently and tried to capture the city’s classic sights as well as the modern business side. While he captured some fantastic scenes, his editing really made this timelapse stand out.

He spent three weeks shooting, followed by 5 weeks of editing the images and footage for a grand total of about 400 hours on this project. That is 2.5 hours for every second of this video, which was entirely self-funded an

My elder daughter has just passed her 16th birthday, and she never notches up another year without recalling my original E-type Jaguar. A month before she was born, her mother was taken into hospital for observation; and on that same day the car was sent down from Coventry for me to test. I was on my own, free to go wherever I fancied and at whatever hour. To take me, I had the car that was the sensation of the early ‘60s, the car that, even two years after production had begun in 1961, could still turn more heads than a platoon of poachers in a poultry farm. It fitted like a glove, went like the wind, looked like a million dollars, and sold for a little more than a couple of thousand pounds. Even though it might be doomed in some hands to idle its life away in a top-gear London loiter, it carried about itself everywhere the immense and unquestioned authority of a car that was known to be capable of 150mph.

It was time for me to fulfil a long-cherished ambition, to see the dawn from the top of Worcester Beacon, to watch the sun come upon the 12 counties within the purview of that loftiest of the Malvern Hills. From my home then in Hampton it was a moderately long drive, but it should not feel long, or take long in an E-type; and in any case I was free to set off whenever I liked. I listened a bit to the KCRW app stream last evening (8.12.2014 Morning Becomes Eclectic Show) when, out of the blue “Someone Saved My Life Tonight” jolted my ears.

I enjoy KCRW’s app and music streams, tolerating their occasional lapses into a Sting/Police song. That said, I am not much of an oldies fan, but in this case, the 1975 song whisked me back in time and brought a smile to my face.

I recalled the days of the (expensive) album. Some were masterpieces, such as Pink Floyd’s Dark Side of the Moon, the Who’s Quadrophenia and Elton John’s Goodbye Yellow Brick road among many others.

So, props to Jason Bentley and his KCRW crew for a subtle (and rare) plug.

weetness was meant to be irresistible.

We are born with a sweet tooth. Babies drink in sugar with their mother’s milk. Sweetness represents an instant energy boost, a fuel that kept our ancestors going in a harsher world where taste buds evolved to distinguish health-giving ripeness and freshness from the dangers of bitter, sour, toxic foods. Sugar gives us drug-like pleasures – lab rats deprived of their sugar-water fix exhibit classic signs of withdrawal. When things are going well, we blissfully say, “Life is sweet.”

And now sweetness is linked with death and disease. Sugars are themselves toxins, some researchers suggest, that cause obesity, diabetes, hyper- tension and Alzheimer’s disease. Sugar has joined salt and fat on the list of dietary evils. Governments and health experts are urging people to cut back their daily intake.

The party is more state of mind than event. Foodies, political types, writers, thinkers, endless PhD’s. Every six months. A blast and a fascinating slice of Madison.

Six years ago. Around the time that I took this photo at Glacier National Park:

The camera that captured this image was a Sigma DP1, in 2008 (one year post iPhone, more on that later). I remember being astonished at the DP1’s sharpness and rather unique color expression.

I “like” to carry a small, high quality walk around camera.

Oh, the party. I brought the DP1 to collect a few images of friends enjoying wine and a myriad of food. Our friends are deep, serious foodies. A blast every six months.

Not more than 30 minutes into the party, a long time, now retired art and portrait photographer spotted the DP1. He ran over and waxed on and on about the “foveon sensor”. “May I?”. Yes, of course. Off he went to collect some great people shots.

Two years ago information about the DP2 Merrill or “DP2M” arrived in my newsreader. I managed to find a great price and bought it, then sold the DP1 to an Atlanta photographer.

The camera responsiveness was somewhat improved, though the post processing software was still terrible. Image quality was and is fantastic, including low light opportunities: 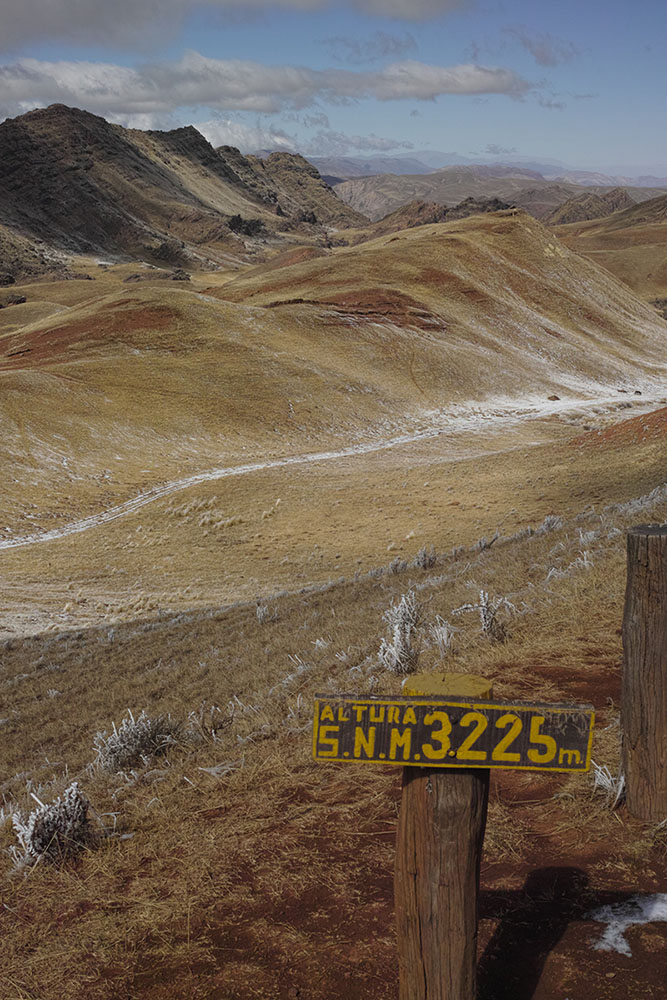 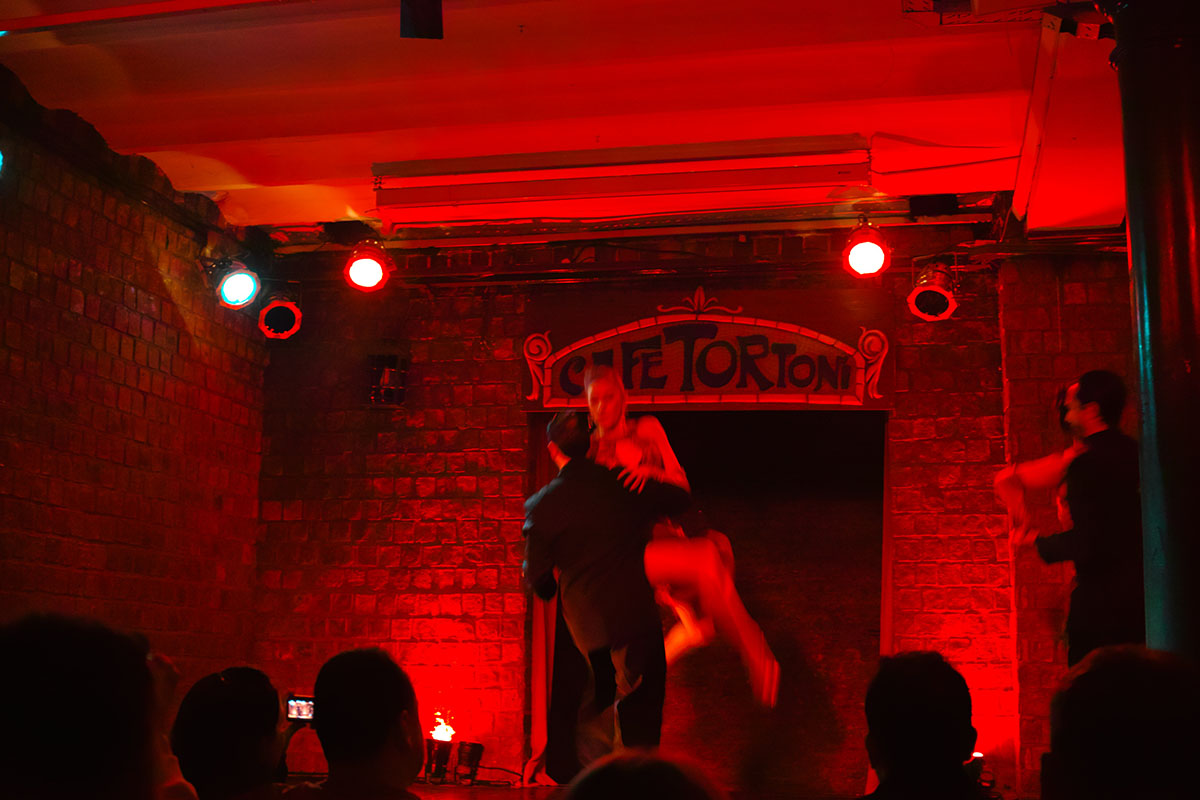 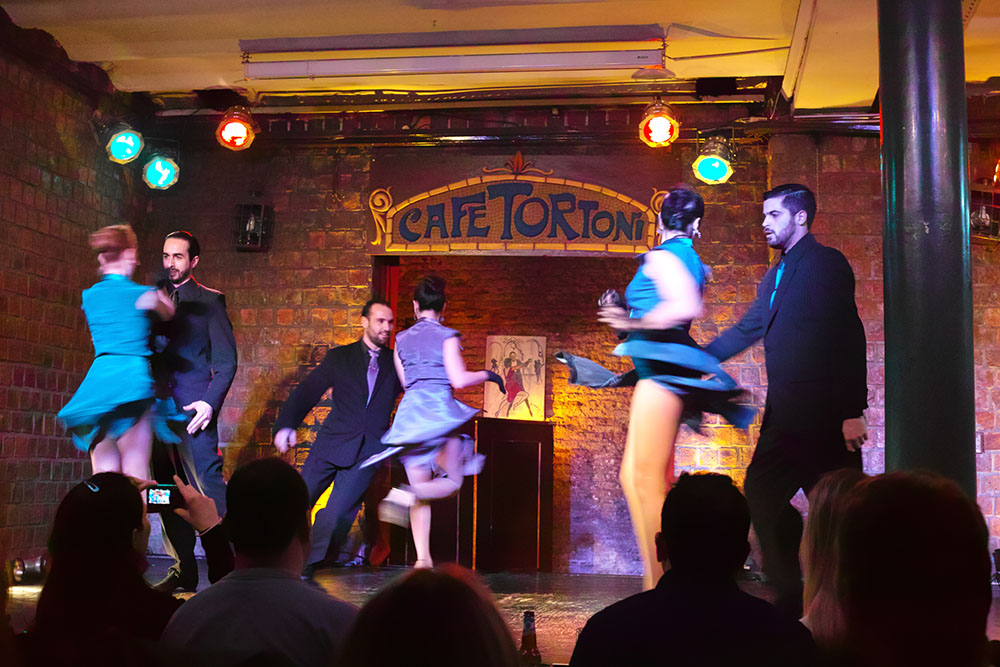 That said, the camera’s responsiveness, battery life and occasional lockup during a “decisive moment” is annoying. The battery and memory card flap died 6 months ago – not great on a two year old camera.

However, the image quality continues to appeal.

Now comes the DP2M’s replacement, the DP2 Quattro or #DP2Quattro.

I had an opportunity to collect some images with it over the past few days while walking around Madison. I’ve made no attempt at deep, technical comparisons. Rather, I was interested in how well it performed when walking around – my DPx use case. 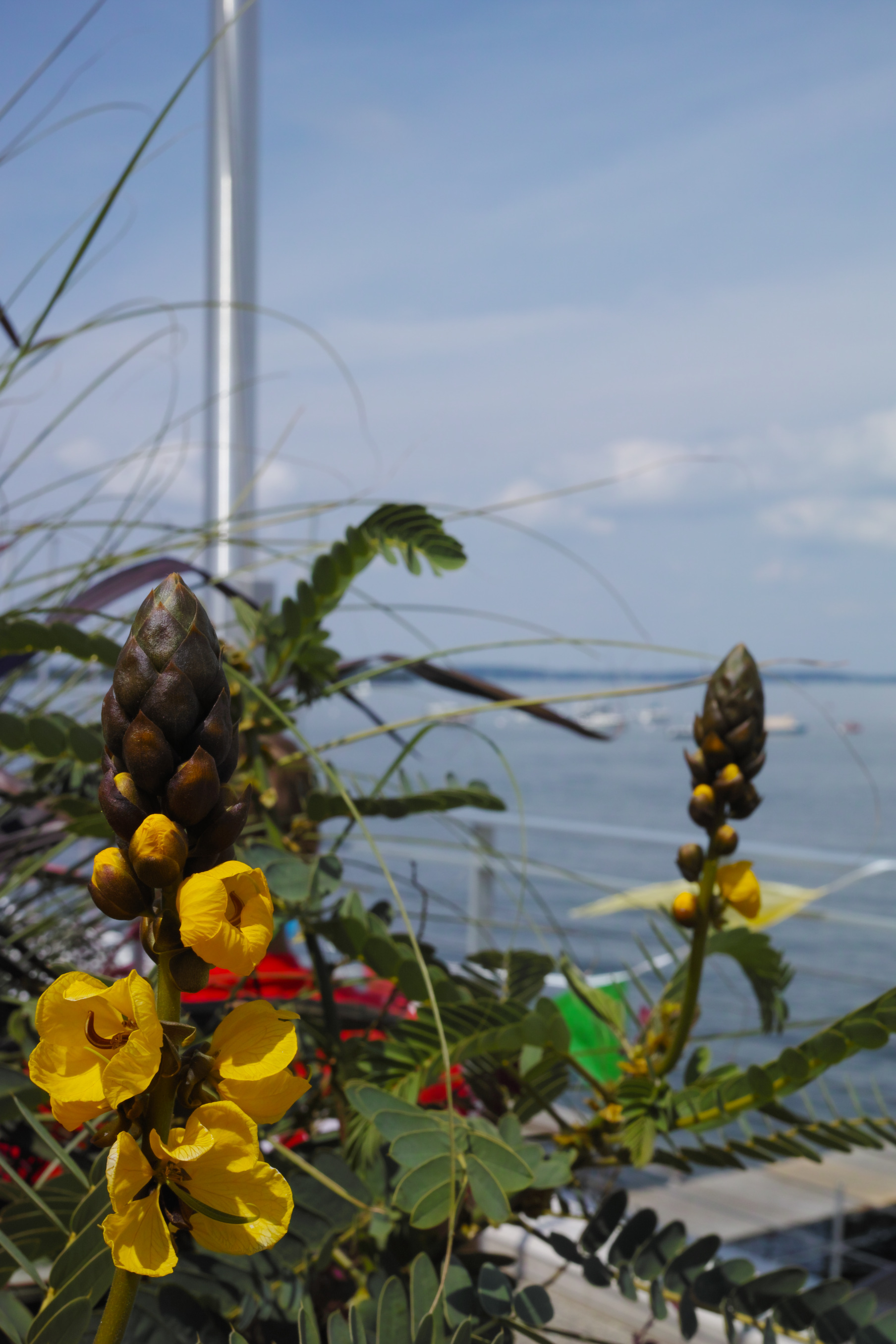 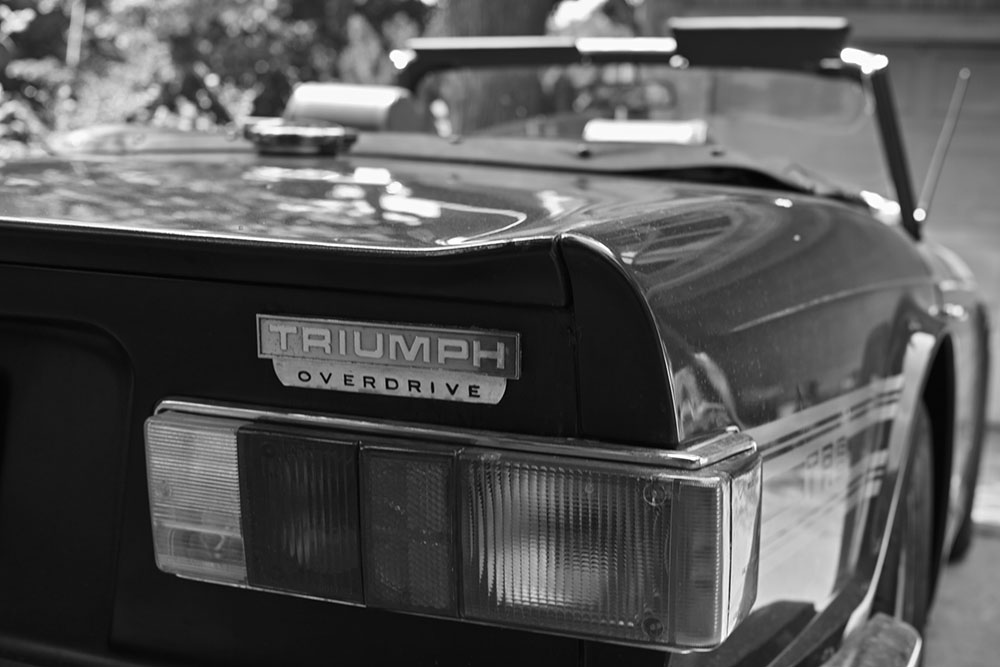 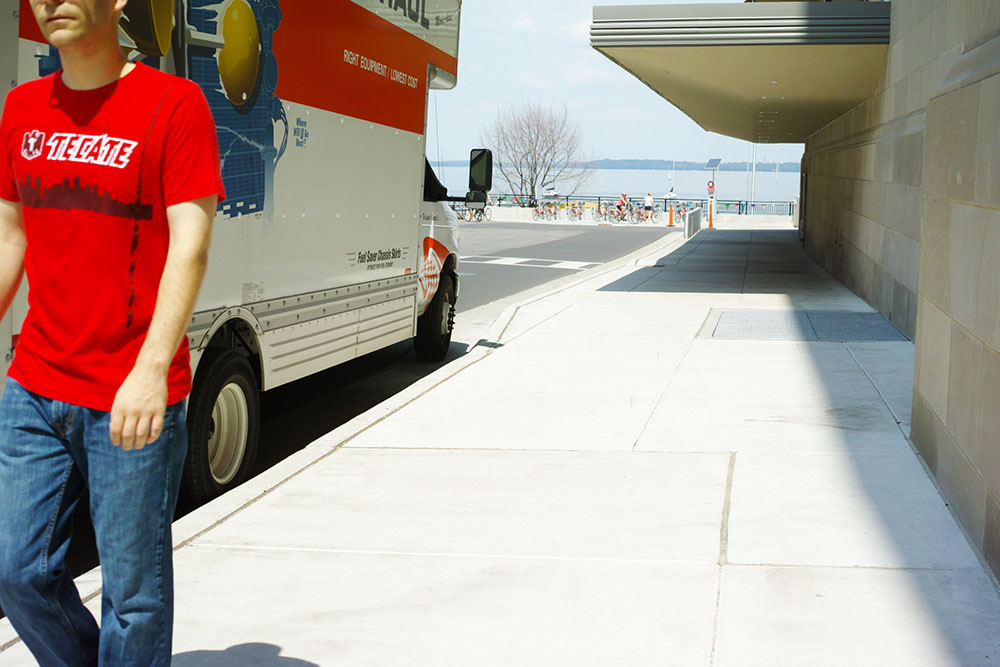 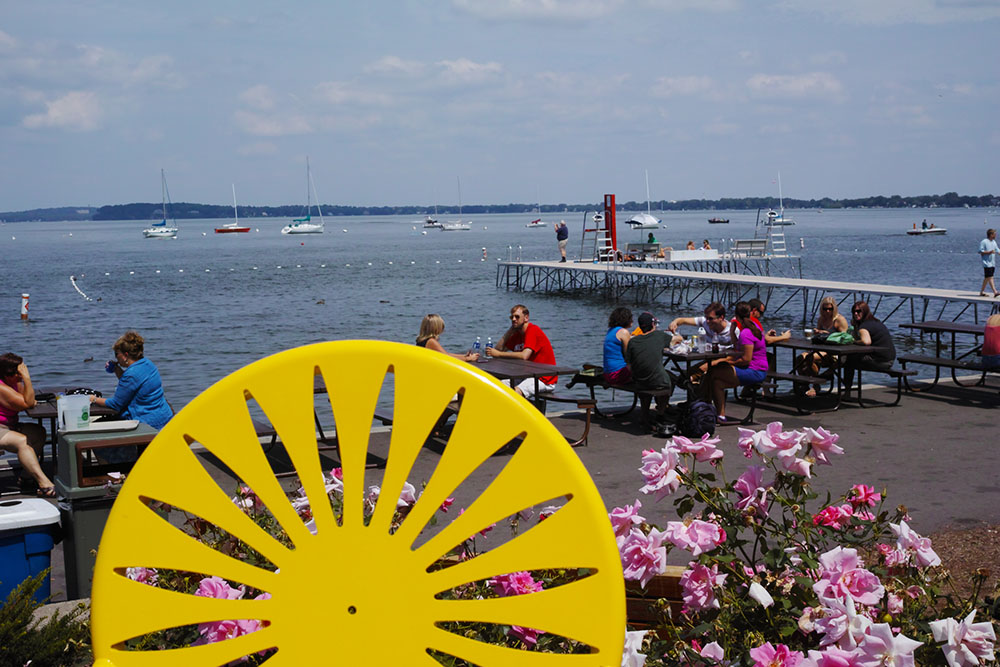 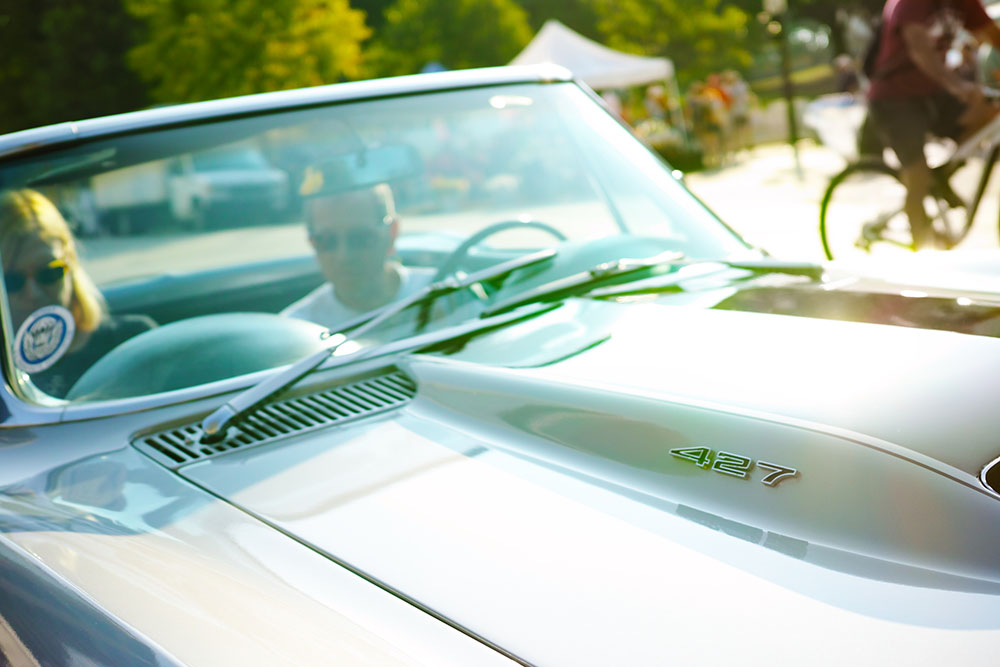 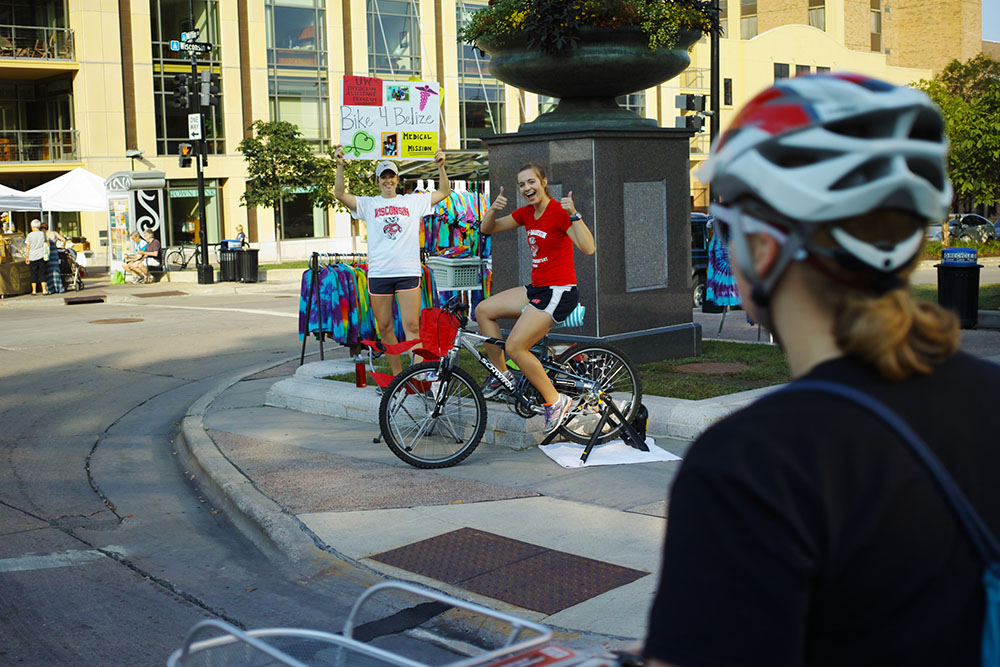 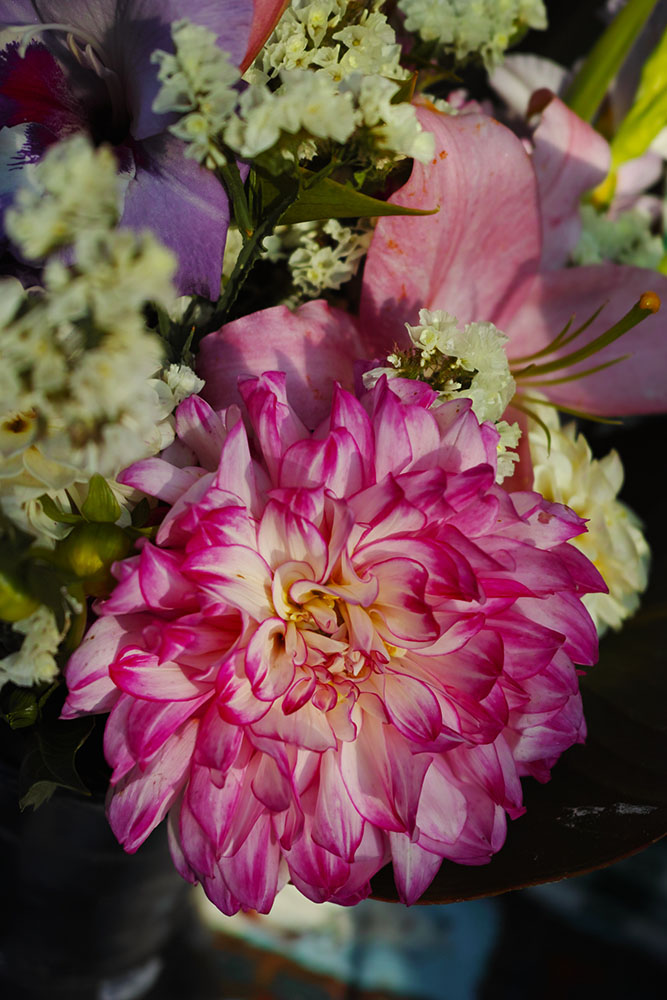 The camera’s responsiveness and build quality are substantially better than previous iterations. Sigma’s post processing software is somewhat improved, but still much too slow. It is a very good walk around camera.

The camera market could not be more different than the DP1 era, 6+ years ago. Today, iPhone is the “camera” of choice for many. The iPhone’s image quality, connectivity and incredible software environment has decimated much of the entry and mid range camera market.

I took the following image with my iPhone 5s moments after capturing the same flowers with the DP2 Quattro (above). The iPhone image can be quickly shared (and edited if necessary). 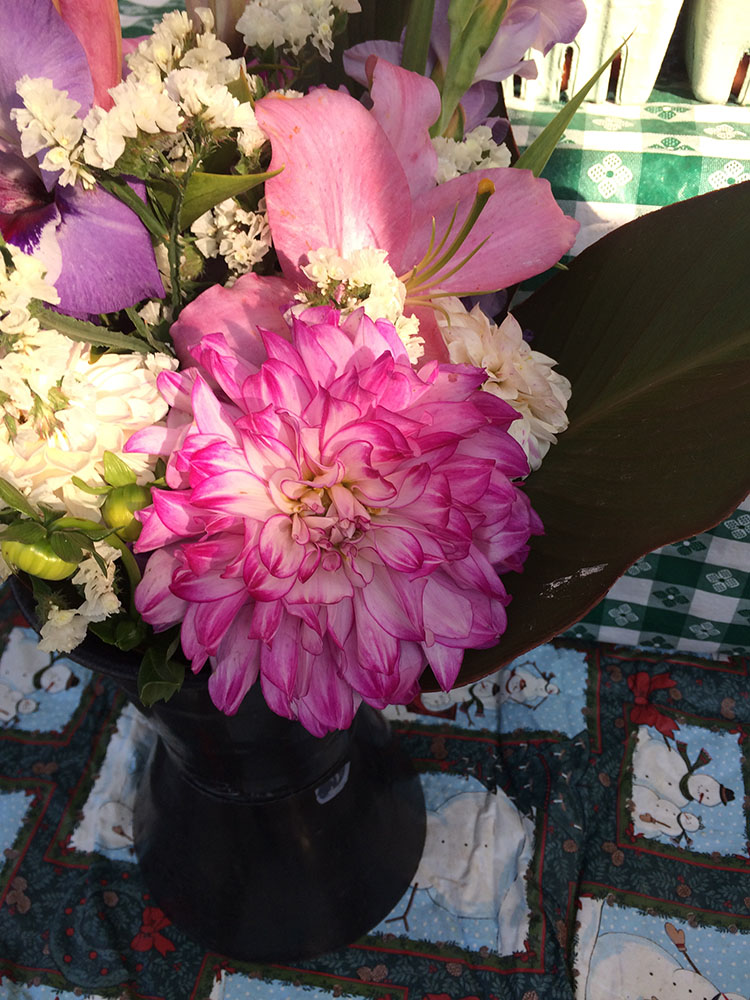 The new DP2 Quattro lacks an interesting wireless interface for apps. DP2Q users’ must collect the image and somehow move it from the SD card to their computing device. For most of the market, that device is a smartphone. Currently, the images must be post processed using Sigma’s software for Windows or Mac. Nothing exists – as far as I know – for iPhones, iPads or Google Play devices.

Ideally, Sigma should have included an iOS app to control the camera and move images. Reasonable editing should also be available on these devices. Sony has taken a few steps into this space with “PlayMemories Mobile”.

I asked our college student children if they were interested in trying out the DP2 Quattro. “No.” Both, along with millions of others do quite well with their iPhone cameras + apps.

I hope that Sigma introduces apps to create and use the beautiful images on iPhones, iPads and Google Play devices. Time is of the essence. The iPhone 6 introduction is just around the corner.

Sony’s PlayMemories Mobile in the App Store and Google Play.

P.S. A further wish: A tilt-shift version of the DPx series.

Walking around a bit at the Wisconsin Memorial Union Lakefront.