Chris Anderson correctly analyzes the “we media” bubble. Change is certainly underway in the media world, but it will not, clearly be linear:

First, let’s agree that “media” is anything that people want to read, watch or listen to, amateur or professional. The difference between the “old” media and the “new” is that old media packages content and new media atomizes it. Old media is all about building businesses around content. New media is about the content, period. Old media is about platforms. New media is about individual people. (Note: “old” does not mean bad and “new” good–I do, after all, run a very nicely growing magazine/old media business.)

When he started, the Big Three completely controlled car sales in the United States. The only foreign company of any prominence was Volkswagen, and as Press recalled, Toyota’s modest sales were lumped with various tiny carmakers as “Other.” Still, soon after he arrived, Press realized he liked the company’s intimacy: he could meet face to face with top managers and exert some influence over marketing decisions. And he liked Toyota’s obsession with customer satisfaction. When he told me about his first trip to Japan, he seemed to be recounting a religious experience. “As a young person, you are searching for this level of comfort, you don’t know what it is, but you’re sort of uncomfortable,” he said. In Japan, as he put it, he found a home, a place where everything from the politeness of the people to the organization of the factories made sense. On that first trip, at a restaurant one evening, he tried a rich corn soup and asked the waitress for the recipe. She checked with the chef, who explained that there was no recipe; it had been handed down from his mother. The next morning, the waitress came to Press’s hotel room: she had found a cookbook with a recipe for the soup. Press, apparently, was still her customer. “That blew me away,” he said.

It can be simplistic, and often a distortion, to accept a corporate executive as the personification of a corporation, especially one as large and varied as Toyota. Yet Press serves as an apt representative, and not merely because his career arc mirrors the company’s ascendancy. Like Toyota, he expresses himself in private with modesty and care, yet in public his speeches are bold, declarative and effervescent. In his office, he has an informal, relaxed presence and exhibits just a hint of an avuncular stoop; yet he loves to race cars and sometimes swims 5,000 meters a day. Press also has a fluency in the company’s arcane systems and history. Toyota is as much a philosophy as a business, a patchwork of traditions, apothegms and precepts that don’t translate easily into the American vernacular. Some have proved incisive (“Build quality into processes”) and some opaque (“Open the window. It’s a big world out there!”). Toyota’s overarching principle, Press told me, is “to enrich society through the building of cars and trucks.” This phrase should be cause for skepticism, especially coming from a company so adept at marketing and public relations. I lost count of how many times Toyota executives, during the course of my reporting, repeated it and how often I had to keep from recoiling at its hollow peculiarity. And yet, the catch phrase — to enrich and serve society — was not intended, at least originally, to function as a P.R. motto. Historically the idea has meant offering car customers reliability and mobility while investing profits in new plants, technologies and employees. It has also captured an obsessive obligation to build better cars, which reflects the Toyota belief in kaizen, or continuous improvement. Finally, the phrase carries with it the responsibility to plan for the long term — financially, technically, imaginatively. “The company thinks in years and decades,” Michael Robinet, a vice president at CSM Worldwide, a consulting firm that focuses on the global auto industry, told me. “They don’t think in months or quarters.”

I’ve already gushed about Bill Marquard’s business strategy book, WAL-SMART. In the book, this former Wal-Mart executive explains because of Wal-Mart’s unbridled success, this mega-retailer has forever changed the game of business from sourcing to distribution to pricing to inventory methods to merchandising. It’s now up to companies today (and tomorrow) to deal with doing business in the world that Wal-Mart has created and redefined.


Since Marquard spent time at Wal-Mart in the late 90s responsible for developing the company’s strategic planning processes, he has a very unique understanding of the company’s DNA. In the book, Marquard shares five key cultural underpinnings that make Wal-Mart the company it is. (Good stuff!)

It was like watching an era of sports history being erased. In early December, construction workers sawed through the multiple layers of drywall and metal studs separating a row of skyboxes at the Seattle Mariners’ Safeco Field. They tore up the suites’ beech-hardwood floors and carted away their oriental rugs and leather furniture. By the end of the week, the eight skyboxes were gone.

In a reversal that strikes at a cornerstone of pro-sports finances — and of the way corporate America entertains — teams around the country are ripping out luxury suites. These perches have been used to justify billions of dollars in stadium construction over the past two decades. But in many cities, they are losing luster with surprising speed, partly the result of factors that couldn’t have predicted five or 10 years ago, from changes in tax laws to scandal-driven reforms on corporate entertaining.


“At GM, you can’t even buy them a cup of coffee anymore,” says Lin Cummins, the marketing chief at automotive supplier Arvin Meritor in Troy, Mich, which has let the leases expire for its suites in four different sports.

In a blog post today founder Pat Phelan says “Our allfreecalls provider in Iowa today took flight due to increasing pressure from a large USA based carrier. We are working on getting a new number up. We expect to be back in business on Monday afternoon.” 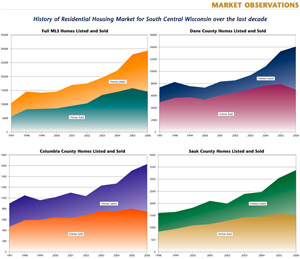 Regular readers of this newsletter will know that 2006 was, to put it mildly, a strange year in real estate. Despite continued record low interest rates and a relatively strong economic and employment picture, it’s well known that housing sales in South Central Wisconsin took a breather in the second half of the year.

What was particularly startling was how sudden and pronounced the change was from the first half of the year to the second. The good news is that, at least as of this writing, it appears that the recovery could be equally as sudden, and perhaps as dramatic.

The question this all begs is: Why did this happen? And, perhaps more important: When will things turn back up?

Dave Stark is a friend and long time customer.

When I added FilmLoop to the TechCrunch DeadPool last month based on rumors of mass layoffs, it was clear there was more to the story. The thirty person company had raised $11.5 million in capital and by any calculation should have still had at least $3 – $5 million left in the bank. They were trailing Slide, RockYou and Photobucket in their market, but had just launched a completely new platform that was getting good reviews. FilmLoop wasn’t dominating the market, but they were not on the ropes, either.

These issues pale in comparison to one problem that could make or break Toyota’s North American operations: their relationship with their hourly workers. In a confidential memo that accidentally ended up in workers’ hands, Seiichi Sudo, president of Engineering and Manufacturing in North America, discussed the cost of American labor and the steps they need to take to control those costs.

The memo, which was inadvertently stored on a shared computer drive, states the US auto industry pays some of the highest manufacturing wages in the world. It compares American wages to those in France and Japan (50 percent higher) and Mexico (500 percent higher). They project their American labor costs will increase by $900m over the next four years.

Well in 1962 I learned from Ben Graham how to assess businesses. He also had the cigar butt analogy for buying businesses…you can usually get one good puff out of it and it’s free. Berkshire made a lot of money after WWII (more than Pfizer and Merck) and then it steadily went downhill. Between 1955 and 1965 Berkshire went from 12 mills to 2 mills and they bought their own stock as mills closed. We bought 100,000 shares out of 1 million in 1962 at $7 3/8 and the company had $10-11/share in working capital…I knew I wouldn’t lose money because of the working capital. It was losing money but it was also liquefying assets by closing mills. Seabury Stanton was running Berkshire at the time and I went to go visit him. We had an agreement that Berkshire would tender $11-1/2 for my shares of the company. At this point, I could not buy any stock as I had inside information. A few weeks later I received a letter from Old Colony Trust containing a tender offer of $11-3/8. Early the following week, Seabury tendered the stock at 11 3/8. As result, I began buying more Berkshire. Other family members of Seabury Stanton sold their shares to me and I gained controlling interest in the company. The family members weren’t very happy with Seabury either really. We ran the mills until 1985. .

But it turns out that there was a lot more to the story. Google leaned hard on North Carolina lawmakers and officials, not just to get the fattest deal possible but to choke off the flow of information along the way.


According to documents obtained by The News & Observer of Raleigh, the company went beyond reasonable expectations of confidentiality to demand absolute secrecy while negotiations were under way, even asking participants to sign nondisclosure agreements; some legislators and local officials did so, but Department of Commerce officials did not. Google executive Rhett Weiss badgered Commerce Secretary Jim Fain about the state’s adherence to process, complaining, for example, when lawmakers wanted an estimate of the cost to North Carolina in lost tax revenue, and threatening to kill the whole thing if Google didn’t get its way.


Businesses need some measure of confidentiality when putting together this kind of transaction. Fair enough. But this is the people’s business, and Google’s high-handedness is an affront to the people of this state.


And then there’s that whole “Don’t be evil” thing. Google spokesman Barry Schnitt told me that the company’s negotiations with the state were “very standard.” If that’s the case, and this is standard operating procedure for the company, then something has gone wrong in Silicon Valley.

Yet another reason to use the excellent Clusty search engine.