Gratitude Journals & Lowenstein’s Challenge:
How many times have
You heard someone say
If I had his money
I could do things my way
But little they know
That it’s so hard to find
One rich man in ten
With a satisfied mind
…
Money can’t buy back
Your youth when you’re old
Or a friend when you’re lonely
Or a love that’s grown cold
The wealthiest person
Is a pauper at times
Compared to the man
With a satisfied mind
Fascinating reading at Marginal Revolution….

The Chicago Sun-Times cut its single-copy circulation numbers by 23%, more than a month after disclosing that it had inflated figures according to this AP article. Times are changing. Advertisers should completely understand what they are getting for their money.

Grand Haven, Mich., makes a splash with full-city Wi-Fi coverage: This seems like yet another city announcement, but it might be the first city with this scale of access that 100-percent live and commercially available

Tony Palmeri, a Green Party candidate for the 54th Assembly District writes about a recent State Elections Board meeting…

A recent Economist article on Wisconsin mentions one of the many challenges facing our state:

Unfortunately, our entrenched politicians evidently cannot see the opportunities at hand. South Korea, recognizing the need for change after the 1997 Asian financial crisis, fully embraced the need for change and pushed true broadband (not the slow stuff we have) adoption to the extreme as John Borland and Michael Kanellos explain.


The US is negotiating to launch a coastal security program for Nigeria. Wants access to bases for training and rapid deployment in case of a crisis. More “free” protection for oil companies. We need to find a way to allocate these costs so that they are incorporated into the price of oil. Currently, we spend $4-5 in naval protection for every barrel that is shipped from the Persian Gulf. Nobody pays for it but the American tax payer.

We’re also subsidizing the Europeans and all other net oil importers.

Aurora Healthcare, the state’s largest private employer with 25,000 employees is attempting to build a new hospital in the Town of Summit. The Oconomowoc Memorial Hospital is minutes away from Aurora’s proposed site. Over 1,000 people attended a public hearing on the required land use changes before the Town’s Plan Commission. The proposed hospital would be built on 53 acres at the southwest corner of Interstate 94 and Hwy 67 in Waukesha County.
I remember someone saying (I wish I could recall the name) that when Madison approves new developments it’s “planned growth” while when nearby towns approve them it’s “urban sprawl”.
Meanwhile, Detroit automakers are fighting the proposed construction of two new hospitals in suburban Detroit, according to an article by Lee Hawkins, Jr.:

END_OF_DOCUMENT_TOKEN_TO_BE_REPLACED

Nigel Ballard of Personal Telco reports that Portland International Airport will have free Wi-Fi: Ballard told an audience at a meeting of the community wireless group this evening that the Port of Portland will turn on 25 access points by Oct. 1 to offer free service at gates and check-in areas. They’re committed to covering the cost of operation for the first year, and then re-evaluating whether fees would be added. Ballard is part of the Portland Telecommunications Steering Committee, and an active community networker and commercial infrastructure builder….
The Dane County Regional Airport, unfortunately, plans to (finally!) add WiFi. However, it will be rather unfriendly – users will have to pay via credit card to use the service (Editors note: I wonder if the cost to administer the paid service will be covered by the small amount of revenue that DCRA WiFi will generate. The airport is just not that big and frankly, flight delays are likely the only time most people will sign up). Send a note to Dane County Executive Kathleen Falk if you’d like to see another approach. Albuquerque’s Sunport also takes an enlightened position: WiFi is free to all. The DCRA position makes no sense. 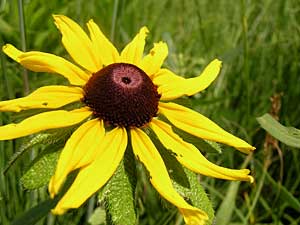 Tim Post on the growing number of backyard prairie gardeners:


Jack Kerouac wrote: “Our battered suitcases were piled on the sidewalk again; we had longer ways to go. But no matter, the road is life.”
His words are the creed of the RV set also known as Tin Can Tourists, Gypsies and Escapees. These ramblers whittle their lives down to the bare necessities, have a yard sale, sell the house, grab the kids, stuff themselves into a thirty foot home on wheels and hit the road.
Some move on every three days, some stay a month or more and work, some home-school the kids parked beside the Grand Canyon. Once they’ve tasted life like this, they don’t want it any other way