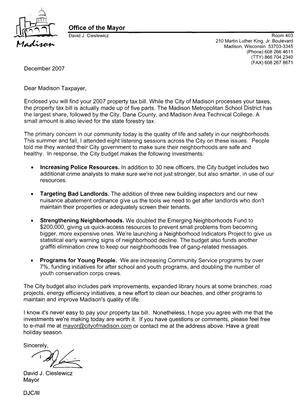 
Enclosed you will find your 2007 property tax bill. While the City of Madison processes your taxes, the property tax bill is actually made up of five parts. The Madison Metropolitan School District has the largest share, followed by the City, Dane County, and Madison Area Technical College. A small amount is also levied for the state forestry tax.
The primary concern in our community today is the quality of life and safety in our neighborhoods. This summer and fall, I attended eight listening sessions across the City on these issues. People told me they wanted their City government to make sure their neighborhoods are safe and healthy. In response, the City budget makes the following investments:

These words are a useful look at the Mayor’s perspective on local taxpayers.