America was forged in opposition to the aristocratic corruption of Europe. Today, inherited wealth is more entrenched in the US than it is in almost every corner of the old world. So too are legacy places at Ivy League universities that were once such wellsprings of US meritocracy.

Today, inherited wealth is more entrenched in the US than it is in almost every corner of the old world

In politics too, dynasty has rarely been more entrenched. It would be little surprise were the 2016 election to turn into a contest between Hillary Clinton and Mr Bush. Seven of the past nine presidential elections have featured a member of the Bush or Clinton families. Next time could make it eight out of 10.

Both families benefit hugely from the networks of donors they have cultivated over the decades. It goes without saying that their donors have done pretty well too. The story continues. George P Bush, Jeb’s son, is running for land commissioner in Texas. Many believe Mrs Clinton’s daughter, Chelsea, is preparing the ground for her own future in US politics.

Of course, dynasty is not only about money. In a celebrity-driven age it also brings valuable name recognition. Moreover, money is not enough on its own to change election outcomes. The infamous Koch brothers, Charles and David, who own the second-largest private corporation in the US, spent tens of millions on the 2012 presidential without avail – as did Mr Adelson. And US democracy is still capable of extraordinary upsets, notably Mr Obama’s emergence from nowhere to dislodge Mrs Clinton in 2008. 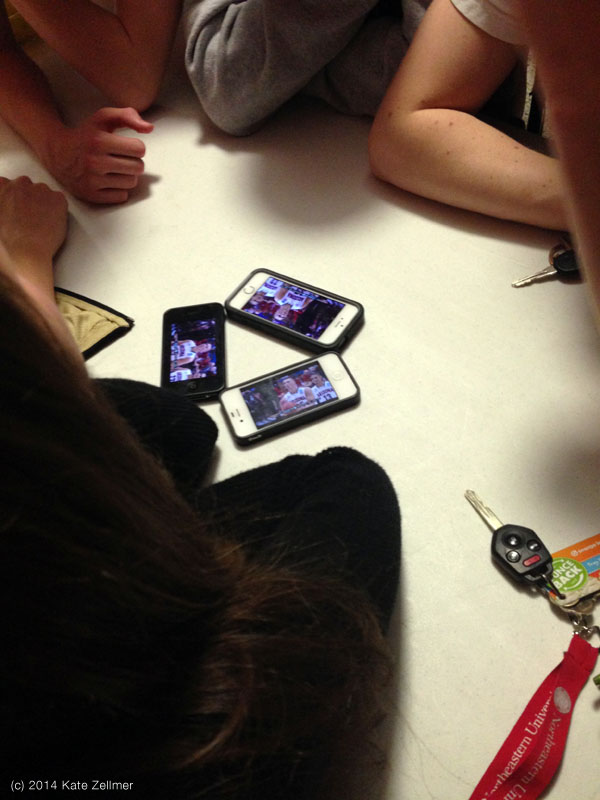 An “awesome” photo of our time by Kate Zellmer. Students watching the NCAA tournament thriller: Arizona vs. Wisconsin via their iPhones.

Ben Thompson reflects on how TV has changed over the years.

“Only 12% of 18-29 year olds said TV would be hard to give up: view the internet, cellphones as essential” – Pew Research.

“Broadcast Audience Older Than Ever Ratings hold up while viewers continue to age out of the demo” – Anthony Crupi.

The Centennia Historical Atlas is a program that shows you border changes in Europe and the Middle East, from the 11th century to the present. It’s meant as an educational tool. The video below is the animated map from the program set to climactic music from the movie Inception.

Next Saturday marks the 230th anniversary of a small ship setting sail from New York. It was the 52nd birthday of George Washington, the man who five years later would become the first president of the United States, and as that little ship set off down the East River, past a 13-gun salute, it set in motion a commercial relationship that is now the most critical in the global economy.

The Empress of China was bound for Canton (Guangzhou) and the first direct contact between America and China. She was to spark a frenzy of maritime trade between the two nations.

These days, every nuance that might represent a commercial or geopolitical change in the relationship between the US and China is eagerly reported by the world’s media, though on that chilly Sunday morning in 1784, there was no relationship at all. And over the course of more than two centuries, while the scale of US-China trade has burgeoned beyond any 18th-century imagination – the total trade in goods and services between the US and China stood at US$539 billion in 2011 – the legacies from those early days remain and some of the characteristics are surprisingly similar.

This historic voyage was not inspired by diplomacy or naval prowess, however, but by Americans’ love of tea.

Google plans to launch its automated cars on the roads by 2017. The project has been a personal obsession for 18 years, he told the Ted audience.

“It started when I was at college in Michigan. I was waiting for the bus and it was cold and snowing,” he said.

He believes that automated cars can help save lives – currently 20 million people are injured each ear in car accidents and in the US crashes are the biggest cause of death for the under 35s.

He finished the interview with a call to firms to embrace new technologies.

“Most businesses fail because they miss the future,” he said.

In the middle of a cold, dark week, is there any greater gift than a new interview with Andrew Wylie? The man is tougher, more concise, and more quotable than anyone else in the industry.

Last October, Andrew Wylie gave an interview to Laura Bennett in The New Republic. He said that the industry was acting like Procter and Gamble when “it’s Hermès.”

But his harshest lines were reserved for Amazon Publishing. He tried a Kindle in the back of a cab in Rome, couldn’t read it in the dim light, and thought, “fuck this.” He compared Amazon to Napoleon, diagnosing the company with a case of greed and megalomania.

SIMFEROPOL, Ukraine — On the eve of the Crimean referendum, while the world anxiously awaited the climax of Ukraine’s political drama, I went to Simferopol’s Crimea Russian Drama Theater to see a production of Nikolai Gogol’s The Government Inspector. In spite of the tension in the city, in spite of the insolent men in military fatigues patrolling every street and intersection, the house was still half-full that Saturday evening, with families, couples, and groups of high-school students occupying the plush seats under a gorgeous, blue-edged, floral-and-butterfly-themed ceiling.

The plot of The Government Inspector is classic bitter Russian satire: A new arrival in a provincial, corrupt town — an imperious young man named Khlestakov — is mistaken by local officials for an important government inspector from St. Petersburg, sent incognito to examine the town’s affairs. The terrified mayor and his cronies immediately grovel before him, offering bribes and favors. The town merchants, believing Khlestakov a real inspector with the power to finally clean up their town, also court him. At the end of the play, the ruse is revealed, but too late: Having taken advantage of everyone, Khlestakov suddenly departs, never to be seen again. In the final act, the real government inspector arrives.

That was a decade ago. Holmes, now 30, dropped out of Stanford and founded a company called Theranos with her tuition money. Last fall it finally introduced its radical blood-testing service in a Walgreens pharmacy near company head­quarters in Palo Alto, California. (The plan is to roll out testing centers nation­wide.) Instead of vials of blood—one for every test needed—Theranos requires only a pinprick and a drop of blood. With that they can perform hundreds of tests, from standard cholesterol checks to sophisticated genetic analyses. The results are faster, more accurate, and far cheaper than conventional methods.

The implications are mind-blowing. With inexpensive and easy access to the infor­mation running through their veins, people will have an unprecedented window on their own health. And a new generation of diagnostic tests could allow them to head off serious afflictions from cancer to diabetes to heart disease.

The modernization of the Ottoman Empire began in 1839 when the state started adapting western ideas; following an almost century long struggle for constitutional rule, the shift culminated in the formation of a secular republic in 1923. It is possible to celebrate, or scrutinize, certain aspects of this process but one thing is certain: A novel about Turkey’s modernization process would not lack the kind of subject matter that led literary theorist Frederic Jameson to famously argue that “all third-world texts are necessarily … allegorical.” There is the ordinary individual coming from an ethnic and cultural background with long held religious beliefs, struggling to fit into the model of a new citizen molded for her by the state apparatus. There is the frustration of a new class of secular citizens pretending to act like Italian gentlemen or French ladies, despite coming from decisively non-European backgrounds. And last, but not least, there is the powerful centralized system of bureaucracy that awards the best imitators of European manners while punishing the less successful ones.

Had The Time Regulation Institute, Ahmet Hamdi Tanp?nar’s magnum opus translated into English by Maureen Freely and Alexander Dawe, only concerned itself with those societal effects of the process of late Ottoman and early republican modernization process it would still be a good book. But it is a great deal more than that. Although it is a deeply political book that undermines the very foundations on which the modernization project had been placed, The Time Regulation Institute is by no means a work of political propaganda or a shallow political allegory. It is one of the best comic novels of twentieth century in any language.

Rommel told Koh that Google made the change after determining that Content Onebox couldn’t extract information from e-mails that hadn’t been opened or deleted, or that were opened on an iPhone or sent through an e-mail provider other than Google.

After the switch to scanning unopened e-mails, Google began creating profiles of people “from which they could extrapolate additional advertisements,” Rommel said, without giving details of how Content Onebox works.

“Google itself has admitted and declared that the location and the timing of Content Onebox’s existence is proprietary, it’s secret, it’s unknown,” Rommel said at the Feb. 27 hearing. “There’s not a single disclosure in the record which identifies that there’s a content extraction feature occurring in the delivery process, which would be the interception.”