I had to cheer when I read the news the other week about a French company that’s selling an ad-blocking service on the Internet. Xavier Niel, the entrepreneurial owner of the web-service provider Free, is threatening to smash the advertiser-supported “free-content” model. That model has transformed Google’s Larry Page, Sergey Brin, and Eric Schmidt into media barons who make William Randolph Hearst look like a small-time operator. Niel, it seems, would also like to make the Internet “free,” but in a way that horrifies the so-called content providers — that is free of paid advertising.

As publisher of a magazine that specializes in substantive, complex, and occasionally lengthy journalism and literature, and that also lives off advertising, I’ve long objected to Google’s systematic campaign to steal everything that isn’t welded to the floor by copyright — while playing nice with its idiotic slogan “Don’t be evil.”

As a journalist and board member of the Authors Guild, I’ve watched in dismay as writers, living and dead, have suffered steep drops in income and copyright control thanks to Google’s — and its smaller rivals’ — logistical support for pirating and repackaging everything that we writers, editors, and publishers hold dear. From the humblest newspaper reporter to the most erudite essayist, we do the work, we invest the money and time, some of us risk our lives — and Google, broadly speaking, reaps the benefits without spending a dime.

It is difficult to think of a company of the past 50 years whose influence and ingenuity have been as profound or widespread as the one formerly known as Apple Computer, Inc. Whatever happens to Apple in the future, consumers everywhere will be far better off because of the bolts of energy that have emerged from One Infinite Loop, Cupertino, California.

Given how subservient the federal judiciary is to government secrecy claims, it is not hyperbole to describe unauthorized leaks as the only real avenue remaining for learning about what the US government does – particularly for discovering the bad acts it commits. That is why the Obama administration is waging an unprecedented war against it – a war that continually escalates – and it is why it is so threatening.

Meanwhile, it is now illegal to unlock your cellphone in “the land of the free and home of the brave”.

When Time magazine selected the British artist Banksy—graffiti master, painter, activist, filmmaker and all-purpose provocateur—for its list of the world’s 100 most influential people in 2010, he found himself in the company of Barack Obama, Steve Jobs and Lady Gaga. He supplied a picture of himself with a paper bag (recyclable, naturally) over his head. Most of his fans don’t really want to know who he is (and have loudly protested Fleet Street attempts to unmask him). But they do want to follow his upward tra­jectory from the outlaw spraying—or, as the argot has it, “bombing”—walls in Bristol, England, during the 1990s to the artist whose work commands hundreds of thousands of dollars in the auction houses of Britain and America. Today, he has bombed cities from Vienna to San Francisco, Barcelona to Paris and Detroit. And he has moved from graffiti on gritty urban walls to paint on canvas, conceptual sculpture and even film, with the guileful documentary Exit Through the Gift Shop, which was nominated for an Academy Award.

Pest Control, the tongue-in-cheek-titled organization set up by the artist to authenticate the real Banksy artwork, also protects him from prying outsiders. Hiding behind a paper bag, or, more commonly, e-mail, Banksy relentlessly controls his own narrative. His last face-to-face interview took place in 2003.

While he may shelter behind a concealed identity, he advocates a direct connection between an artist and his constituency. “There’s a whole new audience out there, and it’s never been easier to sell [one’s art],” Banksy has maintained. “You don’t have to go to college, drag ’round a portfolio, mail off transparencies to snooty galleries or sleep with someone powerful, all you need now is a few ideas and a broadband connection. This is the first time the essentially bourgeois world of art has belonged to the people. We need to make it count.”

Is there a solution? It’s complicated, but I offer three ideas for discussion:

Change the politics
Both parties are wrong on taxing and distributing the capital of the wealthiest 1%. The Republicans are wrong in thinking that the rich create jobs. In reality many of the richest Americans have been investing in efficiency innovations rather than to create jobs. And the Democrats are wrong, because growth won’t happen if they distribute the wealth of the wealthy to everyone else. Money will be spent buying sustaining innovations — replacing consumption with consumption, because there are few empowering products to buy.

The US economy is in the doldrums, unemployment is stubbornly high and Social Security, the New Deal-era safety net for older Americans, is running out of money. It is 1981.

To salvage the popular programme, President Ronald Reagan forms a commission. At its head is Alan Greenspan, the man he later makes chairman of the US Federal Reserve.

The commission procrastinates but then, in a model of backroom bipartisanship that is hard to imagine today, a “gang of nine” does a deal. Payroll taxes go up; over time, so does the Social Security retirement age, from 65 to 67.

But as Mr Greenspan recalls today, from his office overlooking Connecticut Avenue in downtown Washington, the fix was not forever. “Funding over a 75-year period was all that the political system would take. What that does is create a very large deficit in the 76th year and forward.”

It did not emulate the brevity of Abraham Lincoln, who squeezed his second inaugural address into 701 words (yes, considerably shorter than this piece). But at triple Lincoln’s length, Barack Obama was certainly briefer than his own more prolix self in 2009. He was also more directly political. Then Steven Spielberg famously said that it would be impossible to stage the scene for a film. With a crowd of up to 800,000 this time rather than 1.8m, Mr Spielberg might still struggle. But it was a very different occasion.

With the theme “Faith in America’s future”, Mr Obama was always going to give it a lofty frame – the first requirement of any inaugural speech. He was tee-ed up by an unabashedly exceptionalist Chuck Schumer, the New York senator and master of ceremonies, whose words reminded us that the US is in reality a constitutional monarchy as opposed to a crowned republic (such as Canada). The “innate majesty” of US inaugurations “never fails to make our hearts beat faster”, Mr Schumer said. 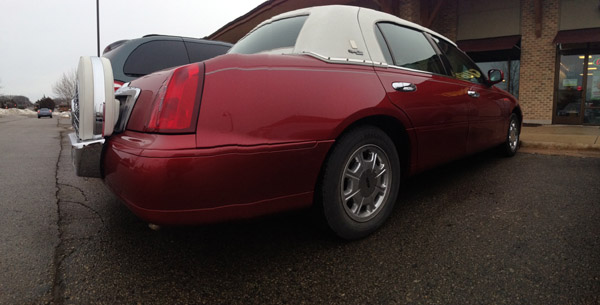 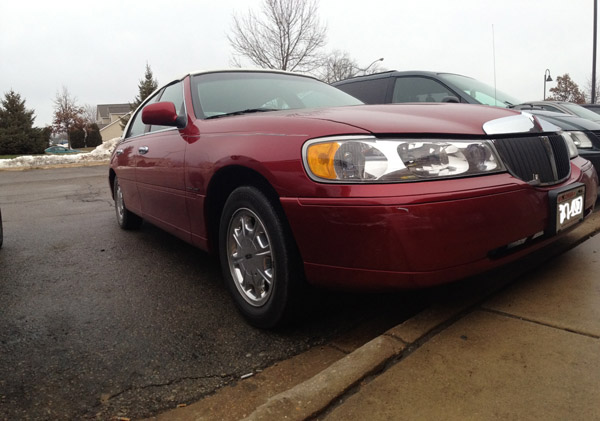 Wikipedia on the Lincoln Town Car.

The numbers are shocking in magnitude: e.g. over the past several years AmEx actually spent about half of its ad spend on buying likes—tens of millions of dollars. Your friends didn’t just go to the American Express fan page and “like” the company for no apparent reason. They did so because they got something.

Across the board big advertisers were told to spend 50% of their ad buy solely on fan acquisition. This is a dirty little secret in ad agency land. Trust me. I’ve seen it firsthand from the marketer, advertiser and agency side.

One direct effect of all this passive liking is an ugly messy data set with a bunch of implicit signals… that are wrong. What happens when your girlfriend types in “restaurants in San Francisco” into graph search and P.F. Chang’s gets spit out because it’s the most-liked restaurant. Was a bad Chinese chain the kind of serendipity you were looking for on your date? Didn’t think so.

Sure FB places check-in feature is another signal (beyond the like) I get it… but this isolated piece of structured metadata means almost nothing without massive scale and structure. So… someone in your social graph went to a restaurant and checked in. Wow! Stop the presses. Thank you FB for saving my night, I could not have eaten without you…

And basic math backs up how weak FB’s structured data is in spades. At launch yesterday FB claimed that one trillion connections have been made on the network to date. Great, that’s a lot of restaurant recs, right? Uhm, not really…

FB has 1 billion users. 1,000 signals x 1 billion is 1 trillion. So each user has logged on average 1,000 events/photos/places/things etc. IN TOTAL. And that’s gonna somehow predict where I want to eat? Most of that 1,000 pieces of data are your actual photos and friends.

The Wall Street Journal reported this week that – two days before the 26-year-old activist killed himself on Friday – federal prosecutors again rejected a plea bargain offer from Swartz’s lawyers that would have kept him out of prison. They instead demanded that he “would need to plead guilty to every count” and made clear that “the government would insist on prison time”. That made a trial on all 15 felony counts – with the threat of a lengthy prison sentence if convicted – a virtual inevitability.

Just three months ago, Ortiz’s office, as TechDirt reported, severely escalated the already-excessive four-felony-count indictment by adding nine new felony counts, each of which “carrie[d] the possibility of a fine and imprisonment of up to 10-20 years per felony”, meaning “the sentence could conceivably total 50+ years and [a] fine in the area of $4 million.” That meant, as Think Progress documented, that Swartz faced “a more severe prison term than killers, slave dealers and bank robbers”.

Swartz’s girlfriend, Taren Stinebrickner-Kauffman, told the WSJ that the case had drained all of his money and he could not afford to pay for a trial. At Swartz’s funeral in Chicago on Tuesday, his father flatly stated that his son “was killed by the government”.

Ortiz and Heymann continue to refuse to speak publicly about what they did in this case – at least officially. Yesterday, Ortiz’s husband, IBM Corp executive Thomas J. Dolan, took to Twitter and – without identifying himself as the US Attorney’s husband – defended the prosecutors’ actions in response to prominent critics, and even harshly criticized the Swartz family for assigning blame to prosecutors: “Truly incredible in their own son’s obit they blame others for his death”, Ortiz’s husband wrote. Once Dolan’s identity was discovered, he received assertive criticism and then sheepishly deleted his Twitter account.