Compound this with a very astute tweet by my friend Chris Heuer (another budding author) a couple of weeks back:
Companies don’t really have conversations with customers, their employees do. People talking to people is real, beyond marketing and spin… 10:56 AM November 01, 2007

James Fallows offers up an interesting contrast between Japan and China.

Put yourself at Bernanke’s shoes; better yet, get Paulson’s shoes too and combine them: wear Ben’s shoe on the left and Hank’s on the right. The goal is to try and walk a straight and narrow a line for the economy, without embarrassing yourself. I submit that this is, in fact, impossible.
On the one foot, the Fed is getting screamed at to lower interest rates by at least another 200-250 basis points: PIMCO, Greenspan, The Conference Board, every bank and broker in town and abroad – they all demand and expect cheaper money for a variety of reasons, all immediately and extremely mercenary. The bond fund managers are salivating at the potential of capital gains from short and medium treasurys, the banks and brokers need the massive cash bailout to stanch the bloodletting from their toxic paper and real estate portfolios, the businessmen need the consumer to keep spending and Greenspan wishes above all to remain relevant – even in retirement.

In April, 2005, Sam Zell travelled to Abu Dhabi to meet Crown Prince Sheikh Mohammed bin Zayed al-Nahyan. Zell is best known as a real-estate magnate, whose reputation has been enhanced by the sale, last February, for thirty-nine billion dollars, of Equity Office Properties Trust, the largest collection of office buildings in the country. Zell, who is sixty-six, delights in claiming that at the time the sale—to Blackstone, the private-equity firm—was “the largest single transaction that has ever been done.” But for decades his appetite for economic opportunity has lured him beyond real estate into investments in oil and gas, barges, insurance, wineries, cruise ships, department stores, waste-to-energy power projects, and radio stations. In April, he signed an $8.2-billion deal that would effectively give him control of Tribune Company, the giant media conglomerate, whose assets include the Chicago Tribune and the Los Angeles Times. For about a dozen years, he has also invested aggressively abroad, most recently in the Middle East. He spends about twelve hundred hours a year on his plane—the equivalent of flying from New York to London every few days. “I want to see everybody in their habitat,” he told me, in a low, rasping voice. “When these people see me come halfway around the world to meet them and spend time with them, it creates a level of confidence that translates into other things”—by which he means, he says, “successful business.”
Zell has made much of his fortune by identifying opportunity where others see only trouble. He says that he is constantly trying to “shut out the noise” of conventional wisdom, because, although it may not always be wrong, it is rarely profitable. In the mid-seventies, he bought about three billion dollars’ worth of distressed real estate in cities across the country for “a dollar down and a hope certificate.” He made hundreds of millions of dollars. In 1978, he published an article about his exploits in Real Estate Review, which he titled “The Grave Dancer” (“I was dancing on the skeletons of other people’s mistakes”), and this became his nickname. If Zell gains control of Tribune Company—the deal is expected to close before the end of the year, though obstacles remain—it will be the biggest distressed entity that he has ever acquired. In addition to the Chicago and Los Angeles daily newspapers, the company owns Newsday, six other dailies, and twenty-three television stations, as well as the Chicago Cubs. In part because of rapidly declining profits in the newspaper industry, Tribune’s revenues have been dropping for years. When Tribune’s directors put the company up for sale, in September, 2006, a number of prospective buyers examined its assets and walked away. By the time Zell made his offer, last March, his only competition was a less fully formed bid from the Los Angeles businessmen Ronald Burkle and Eli Broad. 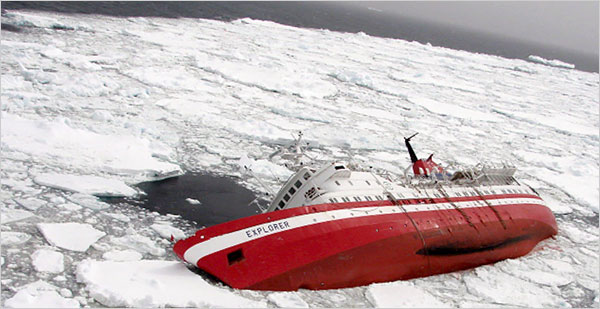 They were modern adventure travelers, following the doomed route of Sir Ernest Shackleton to the frozen ends of the earth. They paid $7,000 to $16,000 to cruise on a ship that had proudly plowed the Antarctic for 40 years.
But sometime early yesterday, the Explorer, fondly known in the maritime world as “the little red ship,” quietly struck ice.
There were the alarms, then the captain’s voice on the public address system calling the 100 passengers and the crew of about 50 to the lecture hall, according to passengers’ accounts on the radio and others relayed from rescuers and the tour operator.
In the lecture hall, they were told that water was creeping in through a fist-size hole punched into the ship’s starboard. As it flooded the grinding engine room, the power failed. The ship ceased responding.
“We all got a little nervous when the ship began to list sharply, and the lifeboats still hadn’t been lowered,” John Cartwright, a Canadian, told CBC radio.

What will likely be the most important scientific and technological breakthroughs with significant commercial value and impacts on the lives of consumers out to 2025?
To begin to answer that question, S)T’s Technology Foresight program conducted a virtual, global focus group of experts in technology, innovation, and business strategy. The group included experts from the Association of Professional Futurists, Tekes, Duke University, Hasbro, Worldwatch, General Motors, Shell, Johnson Controls, and Oxford University, among others.
After consolidating input from the expert panel and analysis by Social Technologies’ futurists, what emerged was our list of top 12 areas for tech innovation through 2025:
Personalized medicine—With the initial mapping of the human genome, scientists are moving rapidly toward the following likely breakthroughs for gene-based products and services:

FORWARD OPERATING BASE AIRBORNE, Afghanistan, Nov. 22 — The soldiers filed into the dining tent in the soft light before evening, carrying heaps of food for a Thanksgiving gathering as polyglot as anywhere.
At one plywood table was a Special Forces staff sergeant who was born in Turkey. “No names, please,” he said. At another was Capt. Walter P. De La Vega of the Army, who trains and supervises the Afghan security forces in Wardak Province. He was born in Peru and reared in New Jersey.
Sgt. Kevin J. Quinones, an acoustic guitar player in camouflage, was born in Ponce, Puerto Rico. When he strummed and sang “America the Beautiful,” the soldiers set aside their food and stood.
A cook who prepared the turkey, Specialist Yevgeny Goussev, was born in Moscow and received a work visa to the United States in 2002. He was a reserve artillery lieutenant in the Russian Army, although he said his commission was probably voided when he enlisted in the United States Army last year.
Specialist Goussev became a United States citizen this month. He said he understood what this American holiday meant. “Thanksgiving is to share with other people, and not expecting anything in return,” he said.

It is a pleasure to be here this evening. I am under strict instructions from the rector of Grace Church, Brooklyn, not to let down the Episcopal side. Uphold the highest standards of the Episcopalian intellectual tradition, he told me. What that tradition might be, he couldn’t say, and neither can I. But I’ll do my level best.
My subject is Benjamin Graham: his life, his investment philosophy, his writings and his Jewishness. About his love life, I will say little, as my time this evening is limited—just three hours, I believe. Some years ago, Fortune Magazine, in a squib it published on the occasion of Graham’s induction into the U.S. Business Hall of Fame, said that the thrice-married father of value investing “leaped from blonde to blonde like an Alpine goat springing from peak to peak.”
I am a frankly worshipful admirer of Graham’s. I love him for his heart as much as for his head. Between 1929 and 1932, his investment partnership lost 70% of its value. Not until 1936 did it recoup all it relinquished since the Crash. Yet Graham persevered and, along with his partner, Jerry Newman, went on to achieve a brilliant long-term investment record—not excluding those three disastrous years. We have all heard the platitude, “The first rule of investing is not to lose money and the second rule is not to forget the first.” Very helpful. Well, Graham shows that a debilitating loss is no reason to give up. . . . Never quit.

Should executives make decisions based on what their “gut” tells them? Lately that idea has lost some favor, as technology’s ability to accumulate and analyze data has rapidly increased — supplanting, according to some accounts, the high-level manager’s need to draw heavily on intuition. But intuition needs some rescuing from its detractors, and the place to start is by clarifying what it really is, and how it should be developed.
Intuition is not a magical sixth sense or a paranormal process; nor does it signify the opposite of reason or random and whimsical decision making. Rather, intuition is a highly complex and highly developed form of reasoning that is based on years of experience and learning, and on facts, patterns, concepts, procedures and abstractions stored in one’s head.
In this article, the authors draw on examples from the worlds of chess, neuroscience and business — especially Austria’s KTM Sportmotorcycle AG — to show that intuitive decision making should not be prematurely buried. They point out that although the study of intuition has not been extensively explored as a part of management science, studies reveal that several ingredients are critical to intuition’s development: years of domain-specific experience; the cultivation of personal and professional networks; the development of emotional intelligence; a tolerance for mistakes; a healthy sense of curiosity; and a sense of intuition’s limits.